You can hear disco beat and clacking billiard balls from the open door of the social club on Prince Street near the Bowery. Young men with slim mustaches drink bottled beer under short-brimmed straw hats, and the aroma of baked bread wafts around the corner from the La Rosa bread factory on Elizabeth Street. Children smack Wiffle balls over passing cars and a sallow complexioned old man sweeps the sidewalk obsessively while his elderly dog plays with a glob of purloined garbage. 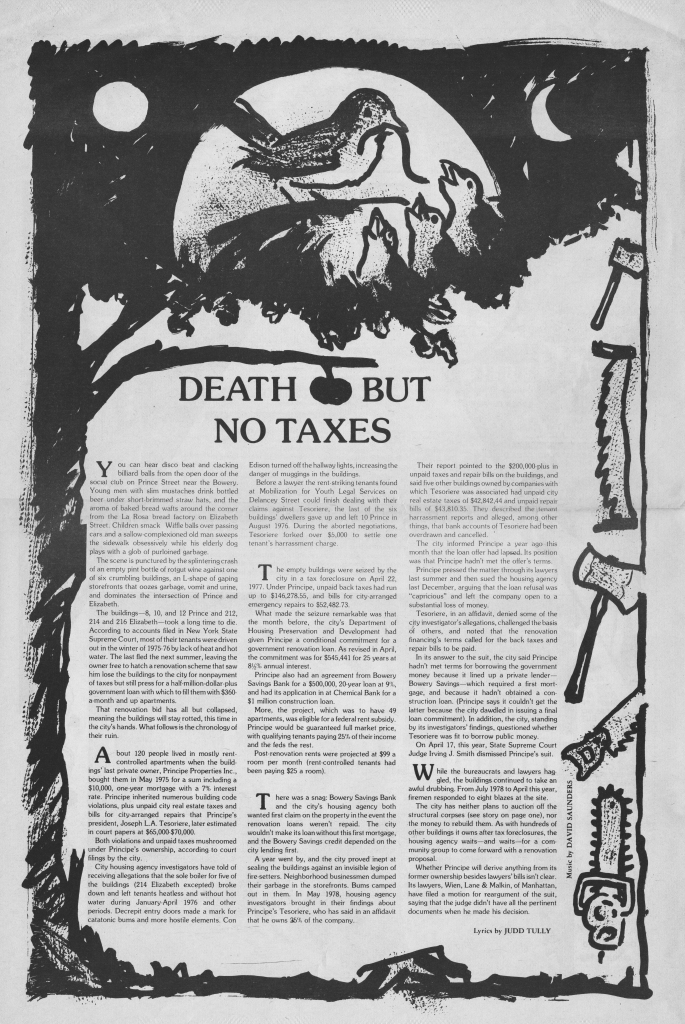 This article originally appeared in the June 1979 issue of Lower East Side Tales, illustrations by David Saunders

The scene is punctured by the splintering crash of an empty pint bottle of rotgut wine against one of six crumbling buildings, an L-shape of gaping storefronts that oozes garbage, vomit and urine, and dominates the intersection of Prince and Elizabeth.

The buildings-8, 10, and 12 Prince and 212, 214 and 216 Elizabeth—took a long time to die. According to accounts filed in New York State Supreme Court, most of their tenants were driven out in the winter of 1975-76 by lack of heat and hot water. The last fled the next summer, leaving the owner free to hatch a renovation scheme that saw him lose the buildings to the city for nonpayment of taxes but still press for a half-million-dollar-plus government loan with which to fill them with $360-government loan with which to fill them with $360-a-month and up apartments.

That renovation bid has all but collapsed, meaning the buildings will stay rotted, this time in the city’s hands. What follows is the chronology of their ruin.

About 120 people lived in mostly rent-controlled apartments when the buildings’ last private owner, Principe Properties Inc., bought them in May 1975 for a sum including a $10,000, one-year mortgage with a 7% interest rate. Principe inherited numerous building code violations, plus unpaid city real estate taxes and bills for city-arranged repairs that Principe’s president, Joseph L.A. Tesoriere, later estimated in court papers at $65,000-$70,000.

Both violations and unpaid taxes mushroomed under Principe’s ownership, according to court filings by the city.

City housing agency investigators have told of receiving allegations that the sole boiler for five of the buildings (214 Elizabeth excepted) broke down and left tenants heatless and without hot water during January-April 1976 and other periods. Decrepit entry doors made a mark for catatonic bums and more hostile elements. ConEdison turned off the hallway lights, increasing the danger of muggings in the buildings.

Before a lawyer the rent-striking tenants found at Mobilization for Youth Legal Services on
Delancey Street could finish dealing with their claims against Tesoriere, the last of the six
buildings’ dwellers gave up and left 10 Prince in August 1976. During the aborted negotiations, Tesoriere forked over $5,000 to settle one tenant’s harassment charge.

What made the seizure remarkable was that the month before, the city’s Department of
Housing Preservation and Development had given Principe a conditional commitment for a government renovation loan. As revised in April, the commitment was for $545,441 for 25 years at 81/2% annual interest.

Principe also had an agreement from Bowery Savings Bank for a $500,000, 20-year loan at 9%, and had its application in at Chemical Bank for a $1 million construction loan.

More, the project, which was to have 49 apartments, was eligible for a federal rent subsidy.
Principe would be guaranteed full market price, with qualifying tenants paying 25% of their income and the feds the rest.

Post-renovation rents were projected at $99 a room per month (rent-controlled tenants had been paying $25 a room).

There was a snag: Bowery Savings Bank and the city’s housing agency both wanted first claim on the property in the event the renovation loans weren’t repaid. The city wouldn’t make its loan without this first mortgage, and the Bowery Savings credit depended on the city lending first.

A year went by, and the city proved inept at sealing the buildings against an invisible legion of fire-setters. Neighborhood businessmen dumped their garbage in the storefronts. Bums camped out in them. In May 1978, housing agency investigators brought in their findings about Principe’s Tesoriere, who has said in an affidavit that he owns 25% of the company.

Their report pointed to the $200,000-plus in unpaid taxes and repair bills on the buildings, and said five other buildings owned by companies with which Tesoriere was associated had unpaid city real estate taxes of $42,842,44 and unpaid repair bills (of $43810.35). They describe the tenant harassment reports and alleged, among other things, that bank accounts of Tesoriere had been overdrawn and cancelled.

The city informed Principe a year ago this month that the loan offer had lapsed. Its position was that Principe hadn’t met the offer’s terms.

Principe pressed the matter through its lawyers last summer and then sued the housing agency last December, arguing that the loan refusal was “capricious” and left the company open to a substantial loss of money.

Tesoriere, in an affidavit, denied some of the city investigator’s allegations, challenged the basis of others, and noted that the renovation financing’s terms called for the back taxes and repair bills to be paid.

In its answer to the suit, the city said Principe hadn’t met terms for borrowing the government money because it lined up a private lender—Bowery Savings—which required a first mortgage, and because it hadn’t obtained a construction loan. (Principe says it couldn’t get the latter because the city dawdled in issuing a final loan commitment). In addition, the city, standing by its investigators’ findings, questioned whether Tesoriere was fit to borrow public money.

While the bureaucrats and lawyers haggled, the buildings continued to take an awful drubbing. From July 1978 to April this year, firemen responded to eight blazes at the site.

The city has neither plans to auction off the structural corpses (see story on page one), nor
the money to rebuild them. As with hundreds of other buildings it owns after tax foreclosures, the housing agency waits—and waits—for a community group to come forward with a renovation
proposal.

Whether Principe will derive anything from its former ownership besides lawyers’ bills isn’t clear. Its lawyers, Wien, Lane & Malkin, of Manhattan, have filed a motion for reargument of the suit, saying that the judge didn’t have all the pertinent documents when he made his decision.

This entry was posted in Articles and tagged Lower East Side, New York. Bookmark the permalink.