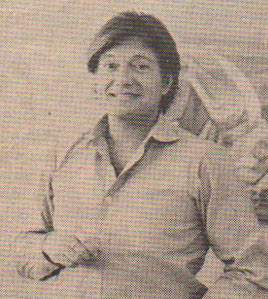 Robert Miller, exuberant and suntanned from a three day visit in the New Mexico desert with Georgia O’Keeffe, settled into a straight-backed chair in his sun-drenched showroom on the 11th floor of 724 5th Avenue and said, “I never had any intentions of being an art dealer. I’ve always been an artist. I paint every day in the morning before I come to the gallery.

The showroom, occupying the southeast corner of the gallery, is a treasure-trove of art: a 300 B.C. statue of a Hellenistic Artemis directs sunlit traffic in the center of the room. An Edward Hopper painting leans casually against a wall. A Jackson Pollock, painted during his stint in the WPA Federal Art Project, is hung catty-corner to a small Rothko oil. blushing rectangular lozenges of red and orange. Two Georgia O’Keeffe watercolors executed in 1917 are propped against a chair. A Lalique vase ( from the master’s own private collection) sits on a windowsill with an unhindered view of the classic Art Deco building across the street.

“I value the opinion of my associates-John, my wife Sarah and Jason McCoy. If an artist comes in here to show his work and we all like it. we’ll show it.” Jason McCoy is a nephew of Jackson Pollock; his father, Sanford McCoy, was Pollock’s brother.

Miller took his BA and MA at Rutgers University. “We had quite a class. Roy Lichtenstein and Alan Kaprow were instructors. George Segal and Lucas Samaras were my classmates. My wife, who is a very fine potter was there.” Sarah Wittenborn Miller is the sister of Dirk Wittenborn, the author of “Eclipse”, a fictional work on the art world.

In 1964, Miller was a. painter with a studio in New York and about to marry. “I wasn’t selling my paintings and I needed to be more financially responsible. I continued to paint and started to sell art.”

Miller went to work at the Andre Emmerich Gallery. “I must say I’m extremely reac-tionary in terms of what I’ve witnessed over the last decade and a half for what passes for fine art-it hardly has moved me. I’ve experienced so much art that was created by four assistants, a thousand yards of cotton duck and a hundred rolls of masking tape in the 1960’s – that machine making of art-it doesn’t interest me. I’ve always felt art was something well made, lasting and specific. I’m not too interested in innuendo either-the Duchampian landscape that most of Pop Art resides in. I think there’s a higher level of art. I am against art by committee.”

“For me to show relatively unknown artists like Robert Zakanitch and Jud Nelson and to be able to run a gallery profess-ionally, I’ve got to sell older more established works out of the back. But I only sell things that I like, whether it’s for $300 or $300,000. If you sell stuff you don’t care about I don’t think you’re in touch with your emotions.”

Artemis, bathed in the glow of midafternoon light seemed to nod her head in agreement.