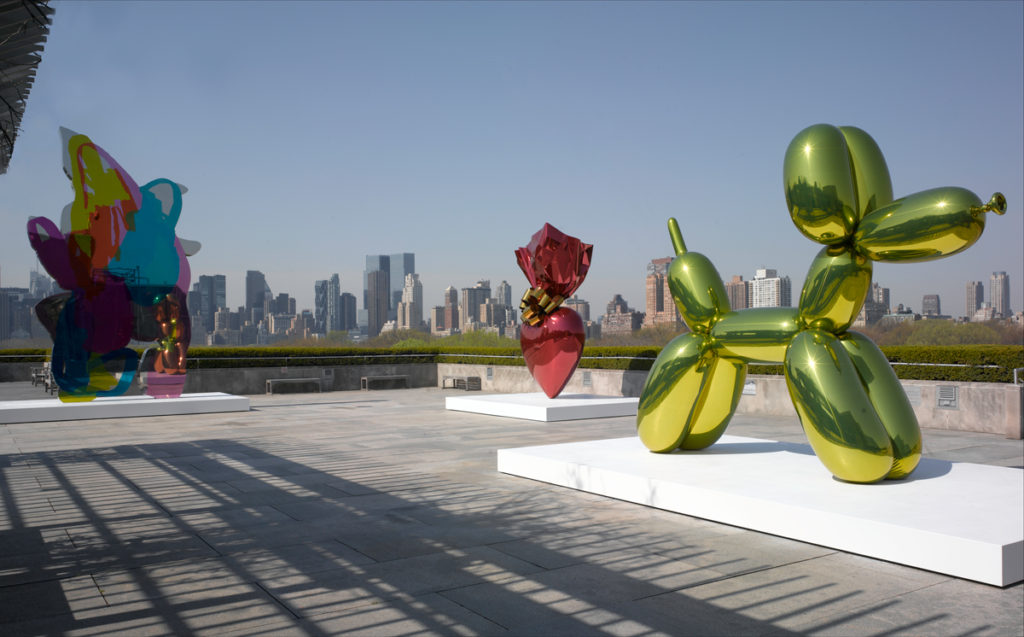 Installation view of “Jeff Koons on the Roof” at the Metropolitan Museum of Art in New York. – THEGIRLSNY/FLICKR

In a case that is bound to rock the art world, a prominent New York collector and art patron has sued two giants of the art market in New York Supreme Court this morning, charging the Gagosian Gallery, Inc. and Jeff Koons, LLC for the “non-delivery” of three multimillion-dollar Jeff Koons sculptures for which the collector has paid more than $13 million.

In the 53-page complaint that includes lines that reference Shakespeare (“Something is rotten in the state of Denmark”) and that are almost Dickensian, New York litigator Aaron Richard Golub charges, “Behind the ostensible façade of Jeff Koons’ art world triumphs and record-breaking auction prices . . . lurks a well-oiled machine, more specifically an established, archaic System as old as the hills applied to the art world to exploit art collectors’ desire to own Jeff Koons sculptures. The archaic system, once all of the obfuscations are stripped away, exposes a garden-variety, interest-free, fraudulent financial routine that harkens the name Ponzi. New money is used to pay old obligations, not to mention that the archaic System is one that oversold the artist’s capacity. Ponzi meets The Producers.”

Apart from the dramatic language, the complaint lays out the unfulfilled, five-year quest of Museum of Modern Art trustee and longtime ARTnews Top 200 collector Steven Tananbaum to take possession of three unrealized sculptures by Koons, including Balloon Venus Hohlen Fels (Magenta), 2013–15, which was to be fabricated in mirror-polished stainless steel with transparent color coating and scaled at 103 by 65 inches.

The original purchase agreement for the sculpture, dated September 11, 2014, stated “an estimated completion date of December 2015.”

Tananbaum made two payments for the sculpture in 2014 of $1.6 million each.

When an employee of Sandy Heller’s powerful art advisory team Heller Group asked Gagosian Gallery, on behalf of Tananbaum in e-mail, whether the production of the sculpture was on schedule, the gallery said the date had moved back to September 2016.

A subsequent e-mail from Gagosian Gallery readjusted the delivery date even further out, to June 2018, saying in part: “Due to the high volume of data, the scanning and engineering phase for this sculpture took longer than anticipated.”

That completion date morphed again to August 2019 with the explanation from the gallery that the delay was “due to the complicated reverse engineering by the fabricator . . . which is taking longer than anticipated.”

To date, Tananbaum has made a deposit and three payments on Balloon Venus totaling $6.4 million.

“Plaintiff has not accepted the estimated completion date of August 2019,” according to the complaint, “and is suing Defendants now thereon.”

According to the complaint, Tananbaum met in November 2016 with Koons at the artist’s New York studio, where a number of new sculptures were presented in maquette form as cardboard models, including two the collector chose, Diana and Eros. Koons allegedly assured the client the production of the large-scale, limited-edition sculptures in the same mirror-polished stainless steel with transparent color coating, would be completed on time.

The plaintiff made a deposit and payments on Eros in December 2016 totaling $2.4 million and likewise for Diana of $4.25 million in 2017.

Tananbaum, according to the complaint, was assured by the gallery that he could view the first rendition of Diana, a.k.a. “Diana I,” before deciding on paying the full purchase price for it and, if he wasn’t pleased, could get his full deposit back.

But that viewing allegedly never took place and despite repeated requests to Gagosian employees for images of the works in progress or evidence that the work was being manufactured, none were forthcoming. For that matter, the complaint claims, the defendants declined to give the name and location of the foundry doing the work, a violation of New York’s Arts & Cultural Affairs Law.

(A similar case concerning a Koons sculpture in production, Gazing Ball (Centaur and Lapith Maiden), 2013, which was filed in the same jurisdiction by Blue Art Limited, an entity of London Old Master dealer Fabrizio Moretti, against David Zwirner and David Zwirner, Inc. in 2016, for non-delivery and breach of contract on the $2 million sale, eventually led to an out-of-court settlement.)

Tananbaum was allegedly also rebuffed by Larry Gagosian in March after seeking a refund on his deposit for Diana, the complaint alleges.

The complaint maintains that Tananbaum did not agree to the postponed estimated completion dates for Eros and Diana and seeks damages for breach of the agreements.

“This case,” Golub said in a phone interview, “is about buying sculptures that are being commissioned by Jeff Koons and not getting anything that you paid for. This is a simple case of ‘you didn’t get what you paid for.’ ”

“My client put down, what, $13 million, and he’s got nothing for it. When he looks out at his front lawn he’s got absolutely nothing. The last thing my client wanted to do was sue a gallery and sue an artist. They left him no alternative. They asked for this lawsuit on a silver platter.”

Reached by phone, an employee at Koons’s studio said that no one was available to comment. A rep for Gagosian Gallery could not be reached for comment. This post will be updated. The parties have 20 days to respond to the complaint.