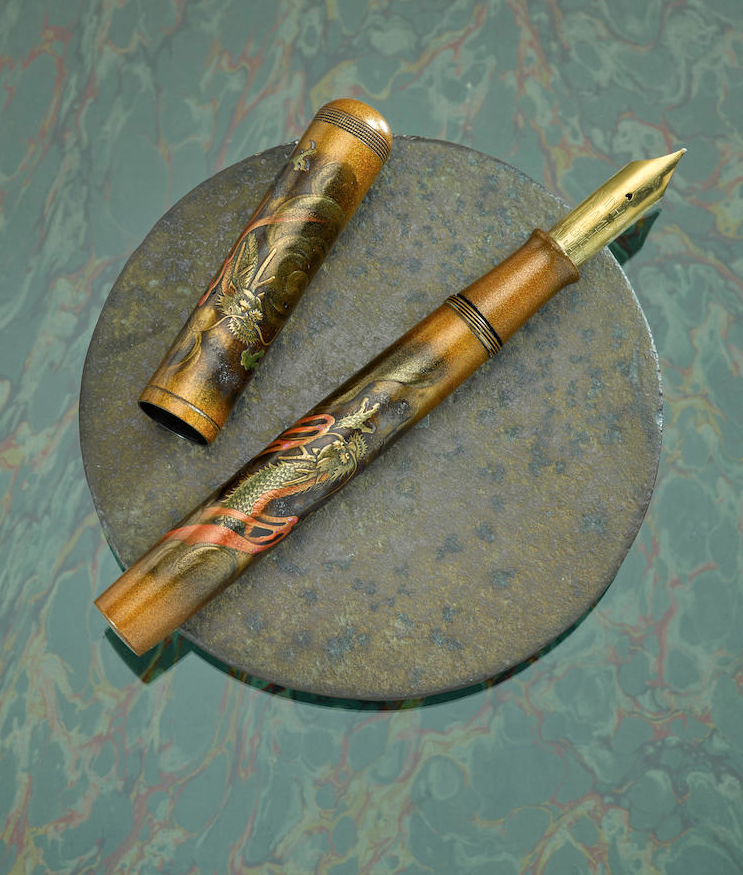 To most people, fountain pens are those hard-to-use, old-fashioned writing instruments that leak all over your favorite shirt pocket.

But that dated perception has changed to a more exciting view, exemplified by the sale of a rare and extraordinary circa 1928 Dunhill-Namiki “Giant” maki-e lacquer pen by Shogo. Decorated with two dragons, the pen sold at auction last December at Bonhams & Brooks in London for a record-shattering $264,588 (est. $89,180-$216,900).

The once male-dominated hobby, now a red-hot collectibles category, has drawn its share of celebrity types, from Prince Charles to Cher to Bill Cosby. For a collectible that began being auctioned regularly only in 1988, fountain pens have captured the fancy and the bank accounts of many new aficionados.

Alexander Crum Ewing, author of The Fountain Pen (published in the United States by Running Press) and the pen specialist at London’s Bonhams & Brooks auction house, is a formidable contender for bringing the fussy hobby up to collectible speed. During several telephone interviews and e-mail exchanges, Crum Ewing discussed the field from his London office. “We weren’t turning people who never thought about buying a pen into collectors,” he says, recalling the early days of buying at auction. “But there were many people who thought it would be a fun thing to collect or always wondered where they could get a nice old pen. It’s funny, but the press here thought it was such a crazy thing at the time for an auction house trying to sell a bunch of old fountain pens, that we got quite a bit of coverage. We had an overflowing room of people at our first sale back in September 1988 who collected pens and shared their hobby.”

As Crum Ewing sees it, fountain pen collecting is a “world-wide hobby, and literally, we probably have clients from Alaska to Japan and all parts in between. It’s comparatively easy for us to run a big international auction, since shipping isn’t a problem and people are happy to effectively buy through mail order or through our Web site based on our experience and our prices.”

Crum Ewing, who resembles a stylishly tweedy academic, caught the mania early as a schoolboy in 1978, when his grandmother gave him a grown-up Parker 51. He says neophyte collectors only have to decide “what do you want to collect and how much are you prepared to pay.” Crum Ewing doesn’t hesitate to mention a suitable brand for emerging devotees. “If you only had to have one pen in the world made during the whole history of fountain pen-making, and if you were going to use it on a regular basis, it’s got to be the Parker 51. It’s the most successful pen that’s ever been made, and it’s the best pen that’s ever been made. There’re so many other advantages to it, it sounds like I’m selling it on commission. It’s a really great tool.”

A Parker 51 with a plastic barrel and metal cap, in what Crum Ewing calls “worn-in but not worn-out” condition, “could cost you as little as $50. If you were going to buy one from a dealer with a guarantee, it’s probably $100. If you wanted to buy one of the rarer Parker 51 versions, say one nicknamed by collectors “Empire State,” since the green-and-yellow gold design on the cap resembles the spire of the famed skyscraper, the price on those is about $2,000.”

If you are hankering for a more exotic Montblanc, for example, say a green-striped or silver-striped celluloid model No. 146 from the “Masterpiece” series of the 1950s and ’60s, the price jumps to the $1,000-$1,500 range. Crum Ewing describes a pen in that range as being in “gift giving” condition: “It doesn’t look worn out, is suitable for future use, and looks good.”

If you want to collect gold and silver Montblancs from the 1920s through the ’50s, the expert says, “They’re obviously getting much more expensive since they’re much rarer pens. Typically, a decent-sized solid gold Montblanc from the ’30s or ’40s would sell for around $6,000 and up.” From there, says Crum Ewing, Montblancs head for the stratosphere. “There are really beautiful Montblanc pens that have yet to come onto the auction market that I’ve seen in private collections or reproduced in books that could well be worth $100,000 at auction.”

Another desirable pen sought by collectors is the Waterman “Patrician” model, manufactured from 1928 to 1932 and considered by many to be the ultimate Art Deco pen, given its bold colors (turquoise is the most desirable) and the geometric shape of the clip. “It’s rare enough for people to say, ÔYeah, I’d love to get one of thoseÑif I could find it,'” says Crum Ewing. A Patrician in excellent condition would bring about $1,300; if it was mint in the box (the best possible condition and literally never used), it would be well over $2,000.

Pen fanciers can turn to a rich supply of state-of-the-art Web sites, such as www.vintagepens.com, where David Nishimura, the resident cyber guru, offers crystal-clear advice on his easily navigable site for both emerging and more seasoned collectors. “In general, you are best advised to buy a few good pens rather than a lot of cheaper specimens,” Nishimura says. “This is an old truism about collecting anything, for what is common will always be common. Look for quality construction, fine design, historical significance and technical interest. Learn to distinguish the unusual and extraordinary from the run-of-the-mill. Don’t cut corners on condition, either aside from real rarities, stick to specimens without significant defects or excessive wear.”

Nishimura points out that a number of significant penmakers have “failed to attract brand-specific collectors,” and opportunities in those lesser-known arenas are ripe. He cites Wirt, Aikin Lambert and John Holland as a trio of attractive sleepers. The cyber penman says vintage pen buyers should always inspect prospective acquisitions with a magnifier and a light to spot unadvertised damage and defects that can significantly sap value.

Other helpful pen sources include magazines like The PENnant and The Journal of Pen Collectors of America, and books such as Fountain Pens and Pencils: The Golden Age of Writing Instruments, by Stuart Schneider and George Fischler.

Bonhams & Brooks’s catalogue of its May 5 auction is scheduled to be available online in April at www.bonhams.com. A wide range of fountain pens and pencils, dating from the Edwardian Age to the so-called Golden Age of fountain pens of the 1920s and ’30s, as well as postwar examples, will be offered, with estimates starting below $200.

No matter what the brand or price range, Crum Ewing says collectors should pay close attention to a pen’s condition. “When the market rises, pens in the best condition tend to rise quickest, and when the market falls, ones in dreadful condition sink like a stone.” An example of the former was a Parker No. 60 “Aztec” model, circa 1911, that made $88,320 (est. $40,000-$48,000) at Bonhams in January 2000. Commenting on recent hefty pen prices, Crum Ewing says, “It’s not a completely new price structure for pens or for collectibles in general. It’s just that some of the rarest pieces have been offered for sale at auction.”

Crum Ewing points out that writing with fountain pens can be somewhat challenging to younger folks brought up in a ballpoint pen culture. For those accustomed to holding a pen firmly and pressing down on the paper to make the ink flow, writing with a fountain pen can be daunting. Vintage fountain pens take an even lighter touch than contemporary fountain pens, since the ink flows out by capillary action and too much pressure on the nib can bend, splay or even break the point.

Interestingly, the physics of the writing itself has a bearing on the collectible. As Crum Ewing says, “Many pen collectors are people who like an old pen because it suits their way of writing or it suits their way of business. It might not be used all day, every day, but when it’s needed, it’s an important thing to have, whether it’s signing an important deal or writing a note to your girlfriend.”