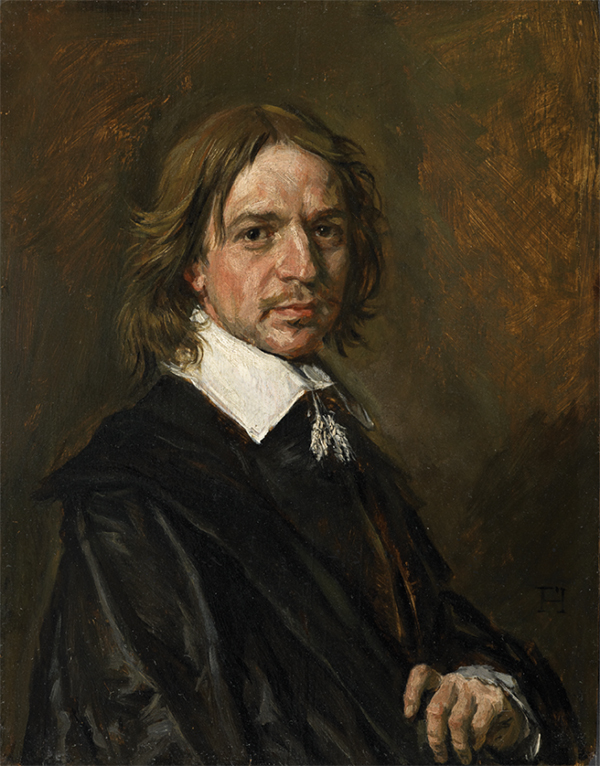 Portrait ot a Man, unsigned but for the initials “FH,” had been attributed to the Dutch Golden Age painter Frans Hal’s, which is now up for debate.

The new in October that a 17th-century Old Master painting, sold by Sotheby’s to a West Coast collector in a $10 million private sale-now rescinded-was called “undoubtedly a forgery” in a statement by the house, triggered panicked reassessments of other recent sales of artworks originating from the same source. The newly mounted anxieties lit afirecracker of suspicion in the scholarly and usually orderly realm of Old Masters art dealing.

The demoted painting is an undated and unsigned (but bearing the initials “FH”) Portrait of a Man, depicting a gentleman in a black shirt with an oversize white collar. Supposedly by Frans Hals, it sold to Seattle billionaire Richard Hedreen in a 2011 deal between Sotheby’s and London-based dealer Mark Weiss, who specializes in Tudor, Stuart, and European Old Masters. In earlyNovember, the Weiss Gallery still featured the painting on its website in the category “notable sales.”

Weiss, who frequently exhibits in the fully vetted European Fine Art Fair (TEFAF) Maasteicht, did not respond to phone calls and e-mails on the matter but has stated to the press that he still believes in the painting’s authenticity. Still, he has yet to relinquish his portion of the $10 million sale to Sotheby’s, and he could wind up facing a lawsuit as a result. 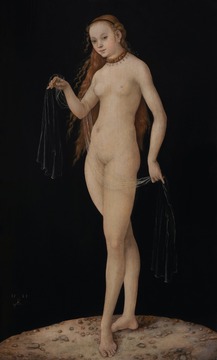 Venus with a Veil, 1531, supposedly by Lucas Cranach the Elder, was confiscated by French authorities from a museum show last March on suspicion of being a fake.

It is understood that Weiss acquired the potentially faux ‘Hats” in France in 2010 for approximately $3 million after the Louvre withdrew its temporary ban on an export license, The painting was for some time under serious consideration for sale to that august institution to the tune of €5 million ($7 million), and was heralded by Burlington Magazine as a “very important addition to Hals’s oeuvre”

Seasoned dealer of Dutch Old Masters and market stalwart Johnny Van Haeften, of the eponymous Mayfair gallery, says, “I’ve never had the picture in my hands. but I had a gut feeling that made me wince when I saw it. The hairs on the back of my neck stood up and I thought, ‘Oops, something is wrong here’ If you asked me what I was really concerned about. I couldn’t tell you!’ For Van Haeften, it was an instinctual reaction.

Another Weiss Gallery transaction is likewise under intense scrutiny: Orazio Gentileschi’s David Contemplating the Read of Goliath. a jewel-like, 17th-century work in oil on lapis lazuli laid on slate. According to a report in the Daily Mail, the gallery sold it for an undisclosed price in 2012 to a young American collector living in the United Kingdom.

Remarkably, the National Gallery of Art in London had the petite, 10-by-71/2-inch Cienteescrti on view in me 2014 exhibition “Making Color” It remained on loan to the institution through March of this year, considered to be a freshly discovered masterpiece.

“At the time the painting was at the National Gallery,” said a press statement, “we had no obvious reasons to doubt it was a work by Gentileschi.”

No other works by Gentileschi, a giant of Baroque-era art, were known to be execute (‘ on the precious stone, used to make up the electric-blue sky in the composition’s background.

Weiss bought both paintings from French collector Giuliano Ruffini, who has recently been identified as the source of other big-name Old Masters; perhaps as many as 25 with a combined value of as much as $255 million.

In the well-trodden and relatively small world of Old Masters collectors, Ruffini was virtually unknown until recently, creating an air of mystery as to his standing and how he managed to acquire his brood of masterpieces. “In all the years I ran the Old Masters department at Christie’s, I never ran across his name,” says Rachel Mauro, now a private dealer in New York, “If someone came to me with something that belonged to him, my response would be – Who’s that?”

In March, serious doubt was raised about another major work: Lucas Cranach the Elder’s Venus with a Veil, 1531, which was seized by French authorities under a judicial order from a museum exhibition in Aix-en-Provence and taken to Paris for further examination. It too carried the provenance of Ruffini in its otherwise bare ownership history. Around the same time, French police raided Ruffini’s estate outside Parma, Italy, and confiscated a number of other works. 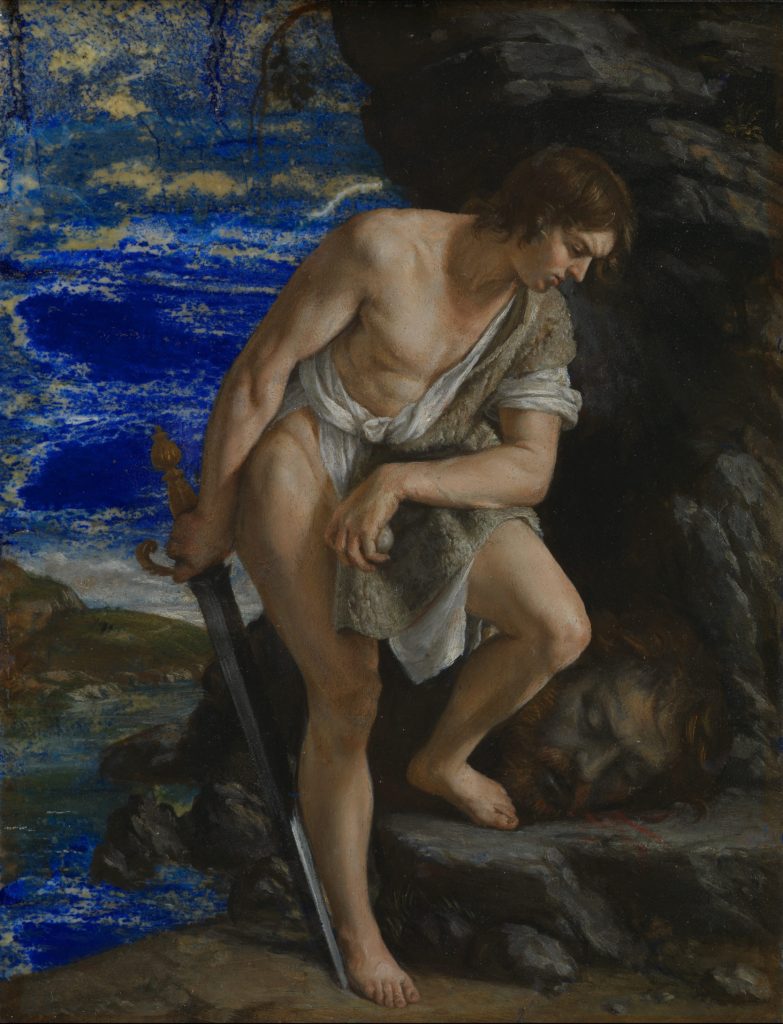 “We remain very careful,” said Phillipe Scarzella, Ruffini’s lawyer. “Mr. Ruffini has always maintained that the attribution of his paintings only came from experts. He is not one himself and he is not an art dealer; he’s just a collector. Nobody can say today if these paintings are genuine or fake. We are trying to stay out of this.” Scarzella also noted that his client has not been charged with any wrongdoing.

The Cranach painting is owned by Hans-Adam II, the Prince of Liechtenstein, who acquired it from London’s Colnaghi gallery in 2013 for the House of Liechtenstein’s Princely Collections at the cost of approximately €7 million ($9 million). In a statement issued on October 13, Johann Kraftner, director of the Liechtenstein collections, said, “Taking intoaccount all the evidence,” including reports by Cranach experts Dieter Koepplin and Werner Schade,”and all examinations to date, the Princely Collections have no reason to doubt the authenticity of the painting, its authorship to Lucas Cranach the Elder, and the origin of the panel to the 16th century.” Kratner also maintained that “the results of this ongoing investigation have been repeatedly passed on to members of the public before information has even been made available to us.”

Roman Herzig, the managing director of Vienna’s Galerie Sanct Lucas, has advised the Princely Collections for decades, although he was not involved with the Cranach acquisition. At the recent TEFAF New York fair, a week after Kraftner’s statement, Herzig said, “Youcan’t simply seize property from a sovereign head of state. I believe the French are behaving horribly.” Afterpausing a moment, Herzig added,”With this impossible behavior, who will ever lend to the French again?”

Konrad Bernheimer of Colnaghi sold the painting to the prince after acquiring it, reportedly, from a Belgian collection for €3.2 million ($4 million) in 2012. Ruffini has filed a civil action in Paris against Jean-Charles Methiaz and Michael Tordjman, two middlemen who sold the Cranach to Colnaghi supposedly without his knowledge or permission. Bernheimer declined to comment on the controversy.

Sotheby’s chose Orion Analytical-who played a partin the recent Knoedler Gallery case-to examine the Hats, and is in the process of investigating another work with a Ruffini provenance, Saint Jerome, by the circle of Girolamo Francesco Maria Mazzola, best known as Parmigianino. The piece sold for $842,500 at Sotheby’s New York in January 2012.

Veteran dealer Richard Feigen, who said he was offered the suspect Cranach at some point but passed on it, notes, “We’ve got to know the background and provenance of each object, and be more demanding for sources.