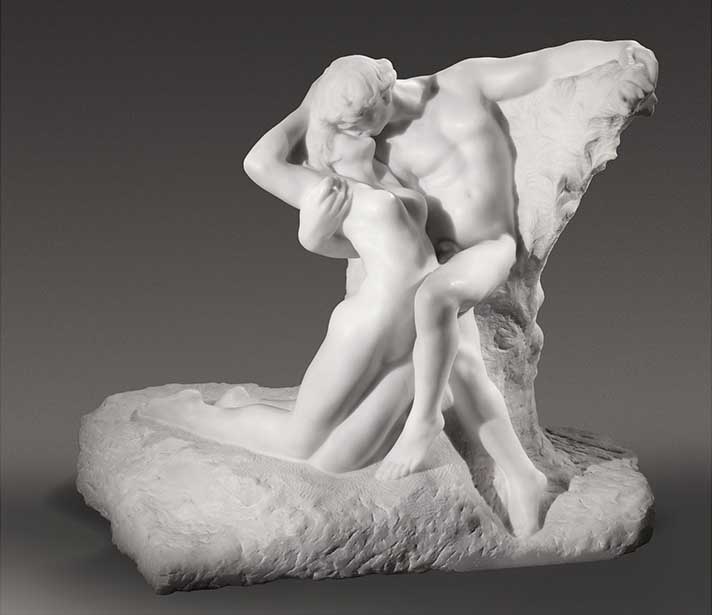 There’s A Veritable Gold Rush of exhibitions celebrating the centennial of Auguste Rodin’s death, ranging from the Portland Museum of Art in Maine to the Grand Palais in Paris, just as his prices at auction for certain celebrated works in carved marble and cast bronze hit the $20 million mark and a first-ever, full-blown catalogue raisonné project steams ahead in Paris under the auspices of Jérôme Le Blay and Galerie Brame & Lorenceau. Rodin’s unflinchingly erotic marble L’éternel printemps, 1884, sold at Sotheby’s New York in May 2016 for $20.4 million, and the even more explicit Iris, messagère des dieux, conceived in 1890–91 and cast in 1902–05, brought £11.5 million ($16.7 million) at Sotheby’s London in February 2016. Only one other sculpture by a 19th-century artist has sold for more at auction, Edgar Degas’s iconic Petite danseuse de quatorze ans, circa 1879–81 and cast posthumously in the 20th century, which fetched £15.8 million ($24.8 million) at Sotheby’s London in June 2015. “Certainly the market is very strong for the top lifetime casts, unquestionably so,” says David Norman, a New York private dealer and former head of the Impressionist and modern department at Sotheby’s. ”The 1920s casts are also strong—particularly as the patinas were often applied by the same craftsmen working with Rodin before his death.” Rodin commands an unassailable reputation as a towering figure in early modern art. Still, previous attempts to fully document his staggering oeuvre―, which numbers approximately 8,000 casts in bronze alone―, have failed, undermined by faulty scholarship or limited coverage of Rodin’s complex and prolific practice.

One of those early publications was Rodin, a catalogue of the artist’s sculptures, published on the 50th anniversary of his 1917 death by Cecile Goldscheider and Lonel Jianou. It was characterized by John Tancock, a former auction house specialist and noted Rodin scholar who authored an authoritative and still prized publication on Rodin in 1976, as “riddled with errors and very incomplete.” Another study, the two-volume and profusely illustrated Rodin, was published in 2013 by Antoinette Le Normand-Romain, the former curator of sculpture at the Musée Rodin in Paris and currently director of the Institut National d’Histoire de L’Art there. While critically well received, it is described by Le Blay as “more of a list than expertise or something reliable.” Normand-Romain didn’t examine the works firsthand, according to Le Blay, relying instead on photographs, a practice he scrupulously avoids in his current catalogue raisonné endeavor. That kind of academic confusion has long dogged Rodin’s market, which was also shaken by a massive production of fake bronzes in the 1980s and afterward by grand forger Guy Hain at the Georges Rudier Foundry in France. Hain falsely used the lifetime appellation of the Alexis Rudier Foundry (Alexis was Georges’s father) as a foundry mark, artificially boosting the value of the works by making them appear to be lifetime as opposed to posthumous casts. Hain was eventually apprehended and sentenced to four years in prison in France for his reported $60-million scam, which also included casting fake bronze works by Constantin Brancusi, Alberto Giacometti, and Jean Arp.

In a 2002 wire service report by upi headlined “The Art World: Fake Bronzes Flood Market,” Le Blay, who then worked as a senior specialist at Christie’s, said that “two out of three bronze sculptures I see are problematic.” When asked how he determines whether a Rodin bronze is correct and accurately dated, Le Blay, who has been compiling the voluminous Rodin archive since 1992, says, “We see every work. It’s something very important for us, to see and inspect the work firsthand, to read the work, to feel the bronze. Photos are not enough to date the work.” Describing some of the challenges facing the Rodin Committee that oversees the catalogue raisonné project, of which he is a founding member, Le Blay observes, “Some of the works, unfortunately, are sold by the heirs of an estate and they don’t remember where their parents acquired the works―—not even the date, the place, or the gallery. That’s one difficult aspect of our job. You must understand that for bronze editions, we don’t have unique subjects.” Le Blay brings up the example of Rodin’s famed Thinker. “You have the proofs, the different casts,” he says. “We have approximately 50 proofs of the midsize [28-inch-high] Thinker. So we might know it is a 1920s cast or one from the 1930s, but we are not always able to link it with an invoice. In the long term, we hope to be able to link every work.” The Rodin specialist started his apprenticeship at the Musée Rodin as a special adviser in 1992 and worked there until 1997; today he has the museum’s full cooperation and open access to its enormous archives. “We are under so much pressure [to authenticate works] from auctioneers, from dealers and private people,” he acknowledges, “that you really need to stick to your job and not be influenced by money and pressure.” The market craves the blessing of the Rodin Committee, as evidenced by the catalogue note in February’s Impressionist and modern evening sale in London at Sotheby’s, when Rodin’s 14¾-inch-high bronze Penseur, petit modèle, cast between 1920 and 1930, sold for £1,568,750 ($1.9 million). “This work will be included in the forthcoming Catalogue critique de l’oeuvre sculpte d’Auguste Rodin currently being prepared by Galerie Brame & Lorenceau under the direction of Jérôme Le Blay under the archive number 2012–3991B.”

To apply for such a number, owners must submit a flat fee of €1,600 ($1,750) to the committee and sign a carefully prepared contract, and the fee is nonrefundable regardless of whether the work turns out to be authentic or not. Rejected works receive a certificate of noninclusion. “We give the information why,” says Le Blay, “and we are always ready to defend our position.” Le Blay points out, “We have been sharing our expertise with auctioneers worldwide, even if some are still not doing proper due diligence, a case in point being Drouot, which represents some 70 independent auction firms in Paris. We have a very strict process when you want to have a work researched by the committee. A lot of people who I might have met once or twice give me a call or send a text asking, ‘Should I buy it or not?’ This is not the way we work.” The committee will illustrate each sculpture with at least five photographs, ultimately creating a photographic opus of at least 40,000 images and publishing it exclusively online. “That’s a reason why we don’t want to publish a book,” quips Le Blay, underscoring the enormous size of his undertaking. Le Blay estimates he has examined some 5,000 works since the project began in late 2004, with approximately 3,000 of them accepted as authentic Rodin bronzes, whether cast during the artist’s lifetime or posthumously. “A lot has been rejected,” he affirms. “Sometimes we see things several times because people try to find another way. They go to Christie’s, they go to Sotheby’s, and then go abroad and see a dealer. Sometimes we see the same work five times.” Rodin made a revolutionary provision in his will and bequest to the French state that posthumous editions of his work be allowed to be cast in order to support his eponymous museum and assure his legacy. This has ironically sown decades of confusion about his work, given the long history of the museum and the world wars, economic downturns, and scandals it has endured. The catalogue raisonné project is expected to go live within the next five years, according to Le Blay.