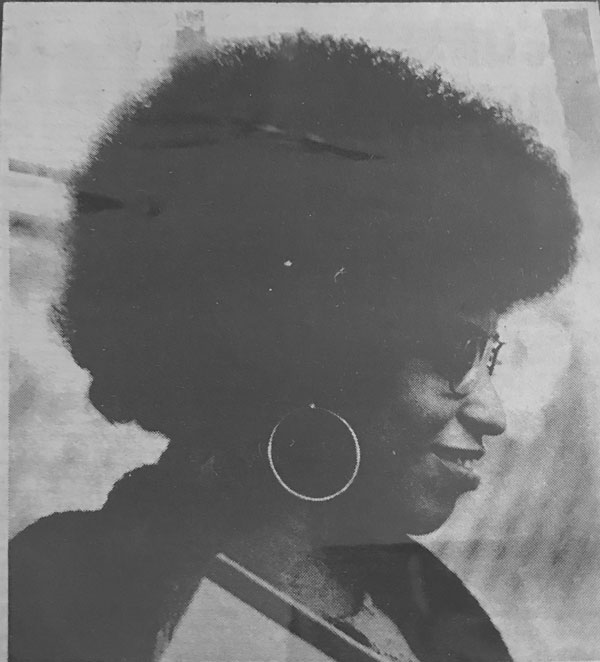 “I’m going to continue to fight, to give all I have to the struggle, to work to free all political prisoners,” Angela said last Sunday. After 22 months of flight, imprisonment and trial Angela Y. Davis was acquitted of murder, kidnap and conspiracy charges in. San Jose on Sunday June 4th at 10:30 AM. The jury of 11 whites and one Chican deliberated 13 hours on the verdict. There was not one ballot for a conviction. “The winning of an acquittal is a people’s victory,” Angela continued. “The very fact of an acquittal does not mean it was a fair trial. A fair trial would have been no trial. Justice is always a struggle until we change the entire fabric of society. My views have not changed.”

After a two hour delay, Sunday, for extra security measures in the courtroom the verdict was read by the court clerk. Judge Arnason’s chamber shook with victorious shouts-an uproar that caused Judge Arnason an unusual loss of temper and threat to clear the courtroom. Order restored, the judge releases the jury and Angela Davis talked to the press.

“The prosecution had no case at all from the very beginning,” said Angela. “People around the country are discovering that whatever the government does is not a-priori, the truth. The people who sat as jurors- I do not consider them as part of the judicial system. They are becoming aware of government repression. We have to organize these people.”

This is how Angela’s mother Sally felt:, “I’m so carried away. This is the happiest day of my life. These past 22 months have been a total nightmare. We are thankful this nightmare has ended. A great struggle was waged for freedom and Justice.”

The chief designer of the nightmare, the creator of the conspiracy, DA Albert Harris had no comment on the verdict. Obviously exhausted from over-taxing his imagination during the 13 week trial DA Harris slumped in his chair at the prosecution table, frozen and mute, surrounded by $750,000 of security measures.

“I arise to address you as a black man. There is not one black face in the jury box. You are a cross-section of Santa Clara County. Not many of you have been close enough to black people to know what it means.

“Think black with me. 300 years ago your forebearers were brought to this country in chains, in slave ships. Only the strong survived. With the Fugitive Slave Law blacks were chased across every border. No charge. No trial. No jury. The Declaration of Independence was written by men owning hundreds of slaves. Black men counted 3/5 of a man.”

“Here we are in the 20th century. Chains of slavery, visible or invisible are there in your every-day life.”

Using the imagery of chains, Branton then proceeded to demolish the State’s case. “All they can prove are things we admit,” he said. “Angela’s association with Jonathan Jackson. Angela’s guns were used on August 7th. Angela had a desire to free the Soledad Brothers. Angela expressed love for George Jackson. “Everything else is guess, speculation and surmise. The prosecution wants you to guess. The prosecution is asking you to draw inferences from circumstantial evidence. His whole case is based on circumstantial evidence.”

After the noon recess Leo Branton pointed to a large drawing of the DA’s chain of circumstantial evidence-“No chain is any stronger than its weakest link,” he said.

The links in drawing the DA’s chain were marked: motive, object, plan, knowledge, intent, flight and the names of the prosecution witnesses. “No single link in this ‘chain can stand the scrutiny of truth,” Branton stated. With dramatic flair he crossed out each one from object to flight. “It’s all rubbish. I never heard of a more outlandish theory, a theory concocted by the DA.”

Now a new drawing appeared on the board behind the podium. Bran-ton continued: “The history of my people has been on of tragedy, oppression, hatred and injustice. The life of Angela Davis in the last two years has been one of terror and agony. This case is a sorry chapter in the history of justice in this country,”

The drawing showed Angela in chains. It faced the jury. “You have an opportunity to be part of history. Whether you want to or not you will be. We have tried to get over to you the gigantic hoax that has been perpetrated. You write the last chapter. The only verdict…not guilty. I’m sure you will.”

Turning to the display board to his rear Branton ripped the brown paper cover off a third drawing… Angela Davis, chains broken and free. These chains must be broken and destroyed.”

The last part of Branton’s presentation was the reading of Angela’s letter to George from her cell in Marin. The edited version of these letters were prepared by Judge Arnason for prosecution evidence. Author Dalton Trumbo, well known for his anti-war book, “Johny Got His Gun”, transposed the letter into a poem.

During the McCarthy era Trumbo, part of the Hollywood 10, was imprisoned for six months for re-fusing to answer if he was a member of the Communist Party.

The transposed letter produced electric currents in the courtroom. The jury was visibly affected. Branton sat down. A 15 minute recess was called by Judge Amason before Prosecutor Fat Albert had his final rebuttal.

Harris opened in serious dead-pan “These are the last words you’ll hear from me. I have to suggest, to you that .the defense witness are lying.” Harris used the analogy of Robinson Crusoe finding a footprint in the sand to back his circumstantial evidence.

“Angela Davis is responsible for the death ofJudge Harold Haley and the crippling of DA Gary Thomas. You’ll be doing your duty to bring in a verdict of guilty on all three counts.”

Branton ended his final argument at 2:30 to force Harris to finish up on Thursday. Harris was totally unorganized and barely intelligible.

Through the weekend Angela supporters vigiled outside the special security area of the court-room. They had showed up in scores by 3 AM on Thursday to get into the courtroom for the defense summation. Many waited in vain.

I am acquitted,” Angela said. The bail has been returned. The metal detectors and surveillance cameras have been taken down from the courtroom area. They will be used in other counties for other security trials.

The pressroom with the TV monitors is closed. Ma Bell has taken the phones out. The typewriters” are gone. Only the coffee stains remain.

Forty miles to the north Ruchell Magee, Angela’s original co-defendent awaits trial on the same charges. The Angela Davis Defense Committee Office will remain open through the summer for other political trials in Marin and San Francisco.

This entry was posted in Articles and tagged Angela Davis, Black Panthers. Bookmark the permalink.