The high pitched whine from the long-stemmed wine glass punctuated the Formica table top formation of eight pints of fortified wine. Wine taster/critic-author John Gottfried swirled the glass, held it up to the late afternoon light and commented on the “transparent, green-yellow” tint of the Thunderbird wine. Crinkling his nose at the “slightly medicinal odor,” the intrepid critic took a quick sip and after a second’s hesitation, pronounced–“Hmm… not bad.” 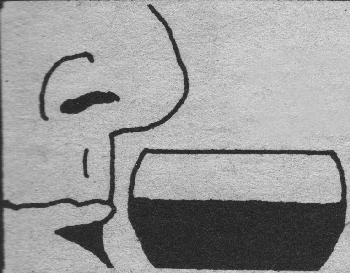 So began a unique look, sniff and taste test of $1.05 a pint sweet wines that sell like demented hot cakes on the Bowery and other selected markets of the free world. Gottfried filled out his comment on Thunderbird, ranked #1 in our pellmell sampling of popular pints, with: “it would go well with Colonel Sanders (the original recipe).

There is no definite chemical taste, which is some thing I really expected.” Our volunteer wine taster (the author of “A Wine Tasting Course: The Practical Way to Know & Enjoy Wine”/McKay, 1978) went on: “The texture effect on the nose tells you this
stuff is very high in alcohol and its volatileness is the stuff that gives you the headache. This is more like something you’d put on one’s arm before an injection.” Marveling at the critic’s ability to wax vinegar on a mere sip of cheap wine, I drank in his serpent tounged-appataisals. “If tends to coat the tongue. It beverage, not a wine. The taste keeps going on.

Rinsing his mouth with a swig of bottled water moving on to the next vintage (a very young mystery), the freelance critic nailed a thimbleful of Mogen David’s MD 20/20 apple wine. “This smells burnt. The color is much deeper than the T-Bird, a deeper and heavy golden color. It’s much much sweeter, like what oozes out of an apple pie. Syrupy. I could see big headaches with this one.”

With a bemused, professorial look, Gottfried patiently explained that the fruit used for such wines is overripe, and generates enormous amounts of sugar. Vintners add yeast strains that eat the sugar, and defecate or sweat out the alcohol just like a human—but can absorb only so much before they get sluggish, drunk and die.

These yeast beasts get the alcoholic content to 14.5% tops. To get it up to the 20% or so contained in most Bowery favorites, the vinters have to add distilled wines. Gottfried’s samplings of the reds produced a ringing endorsement of sweet white wine. “If I had to be a bum, I’d drink white. The whites have it all over the reds. Wines like these are much too young. They should be laid away and forgotten about.”

He said he wouldn’t comment on the differences among the reds. “All those
are just excretory.” Overall, the eight selections were not as bad as I expected, except the reds, which live right down to their expectation.”

Sample #3 in our sip and cringe test was a bottle of White Tiger American Apertif Wine bottled by Liberty Distillers Products in Philadelphia. Alcoholic content was an astronomical 21%. “Interesting. It looks like sulphur. It smells like cheap toilet water. It has a very chemical smell, like that old glue you used to play with as a kid with the rubber nipple top.” Staring at the blood-red eyes of the marling tiger on the austere black label, Gottfried gorged on—”It tastes of lemon and orange and sugar water. That’s it. Candy!”

Fat dregs of wine coated the curved belly of the abandoned wine glass. Tippling a pint of Gallo’s Muscatel (our critic admitted he was not partial to this particular grape), he emitted a tenorish “Phew. This is different. We’re going straight downhill now. I bet you can recognize your bums by their brand smell. You could spread this on the floor to kill roaches. Pretty vile. It smells like raisinized grapes.” 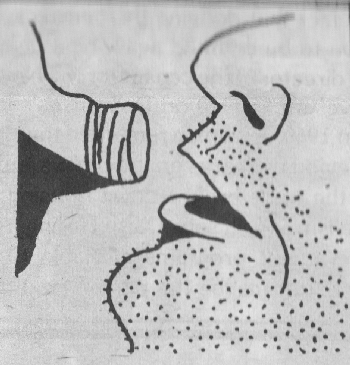 Exhausting our store-bought supply of whites we moved on to the reds, beginning with “Plum Velvet” by an outfit in San Francisco called Foxfire.

“A cheap whore would spread a dab of this stuff behind her ear lobe. It does have a beautiful rust color on the edge—like a copper sunset. This stuff reminds me of Italian concentrate. You know, like Orzata. It’s not too bad. It could be used as flavoring in a very cheap dessert. But I can’t imagine drinking it in quantity.”

Onto Night Train Express: “I’m not sure if 1 should sip this or change it every 3,000 miles. That’s awful. That’s giving me eyestrain just looking at it. The color is Playboy Pink. It smells like bad gumdrops.”

Number seven on the pink elephant tour was Vine City 21, “The Wine of the 21st Century,’ made and bottled in Naples, New York. “There’s so much sugar in this brew its like alcoholic soda pop. In this case they took bad wine that was over the hill and fortified it.”

Last on our list was the ever-popular Richards Wild Irish Rose. “Even the smell is giving me a headache. Here is that glue smell again. I know what it’s like—plastic. It’s like eating a plastic seat cover. Call this Wild Cough Drop.’

So, at last, the list, on which our stellar imbiber elevated one “excretorius” red to an impressive third place.

This entry was posted in Articles and tagged Bowery, Lower East Side, wine tasting. Bookmark the permalink.