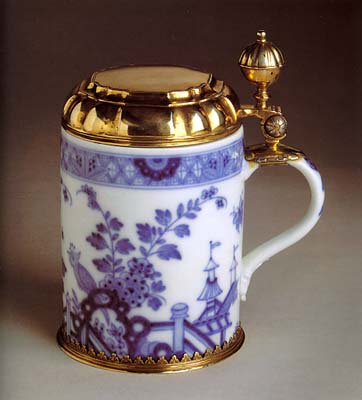 “There’s quality everywhere,” noted Brian Haughton, exhibitor and co-impresario (with his wife Anna Haughton) of the International Fine Art Antique Dealers Show, just finishing its seven-day run (at 7 p.m. on Thursday, Oct. 23) at the Seventh Regiment Armory on Park Avenue and East 67th Street. “There’s no market like New York and this year, people are not worried about being seen buying.”

Indeed, some 88 dealers from around the world set-up an elaborate melange of individually designed booths featuring material ranging from French Impressionist paintings and Egyptian antiquities to rare books and fine antique furniture, all attractive lures for the casual browser as well as cash-heavy collectors. Now in its ninth year, the fair seems to ooze success, judging by the joyous responses of several of the exhibitors. Haughton’s own booth (he’s an antique dealer with a shop on Old Bond Street in London) was enjoying brisk sales, including some fine Meissen silver-gilt mounted tankards and English Chelsea “Hans Sloane” dishes. “The market is very strong in your hometown,” says the Englishman.

Though Haughton declines to provide any hard figures on sales (all the material exhibited is vetted beforehand to assure authenticity but individual sales are not recorded), dealers reported the best results since the fair’s inception in 1988, near the height of the booming art market.

“This year, more serious people and a lot more Europeans are looking and buying,” said Laura Siegel, director of Robert Haber & Associates, a top-tier Manhattan antiquities dealer. Siegel cited a European collector who on his first visit to Haber’s booth went away with a $75,000 sculpture of Pharaoh Offering an Image of the Goddess Maat. “We’ve had some good sales,” added Robert Haber, “but more importantly, we’ve had many interested people come in who are not involved in ancient art but collect in other areas like contemporary art, old masters and even Primitive and Pre-Columbian Art. We’re excited about that new interest.” Haber also sold a Greek marble statue from the late 4th-3rd century BC depicting Asklepios, the Greek god of medicine, for a non-HMO price of $75,000.

Haber also made a point of offering less pricey items, including a pair of late-4th-century Roman spoons for $7,000. “The dealers are making an effort as well to prime the pump with excellent objects at reasonable prices.”

At the other end of that spectrum, London’s Richard Green displayed some of the most expensive items in the fair, including Fleurs et Fruits, Pierre-Auguste Renoir’s still-blooming still life from ca. 1889, at $5 million. “It won’t sell overnight,” said Green, “but it can happen. We’ve had interest.” Green was equally optimistic on the future sale of his Pieter Brueghel the Younger, L’Auberge St. Michel (1626), priced at $1.25 million.

The Chinese Porcelain Company of New York sold a pair of ceramic horses from the Chinese Wei Dynasty for $160,000.

In the big picture department, Waring Hopkins of Galerie Hopkins-Thomas in Paris had a virtual field day, selling some 12 French Impressionist and Post-Impressionist pictures, ranging in price from $50,000 to just under $2 million.

“This is without a doubt, the best antiques show in America,” raved Gaylord Dillingham of San Francisco’s Dillingham Gallery. “It’s such an important market for us,” continued Dillingham, who energetically jabbed at the majority of decorators who dominate the trade in San Francisco and “who don’t respond to what I sell.” Dillingham’s is all about high quality English Furniture, including a ravishing example of a mid-18th-century Dutch linen press veneered in burr walnut, that sold early to an Irish client on in the high five figures. “It brings people from all over. I’ve seen South Americans from Chile, Brazil and Argentina. “They’re collecting English and French Furniture.”

Dillingham had more modestly scaled and priced curiosities as well, such as a stunning, hand-carved galleon out of coquille nut from the early 19th century, made by a French sailor-prisoner during the Napoleonic Wars for $2,750. “This is my best year, period,” says the dealer, who began showing at Haughton in its inaugural 1988 exhibition.

Other Haughton veterans, including the Old Master drawings dealer Mia N. Weiner, were equally delighted with the spirit of the fair, likened by some to the long-established Grovesnor Square fair in London. “I’ve never had so much interest,” says Weiner, “and I’ve never sold so quickly and to new clients as well.” Weiner racked up sales at prices ranging from $1,800 to $20,000. She was most pleased with the showing of a newly attributed El Domenichino, Study of a Disquieted, Seated Male Figure (priced at $40,000) and a stunning Francesco Salviato Divine Head (After Michelangelo) and formerly in the esteemed collection of Victoria & Albert Museum benefactor, Sir J.C. Robinson (priced at $300,000).

Of the eight exhibiting newcomers, Belgian dealer Philippe Denys sold out his selection of early-20th-century furniture, including a splendid tortoise-shell cabinet by the Belgian designer Frans Franck, inlaid with ivory and lacquers as well as Art Deco silver and Wiener Werkstatte objects, priced between $15,000 and $50,000. Among his new clients was a trustee of the Metropolitan Museum of Art. “I’ll be back next year!” said Denys.

JUDD TULLY covers the international art market for a variety of publications, including Art & Auction and the Washington Post.