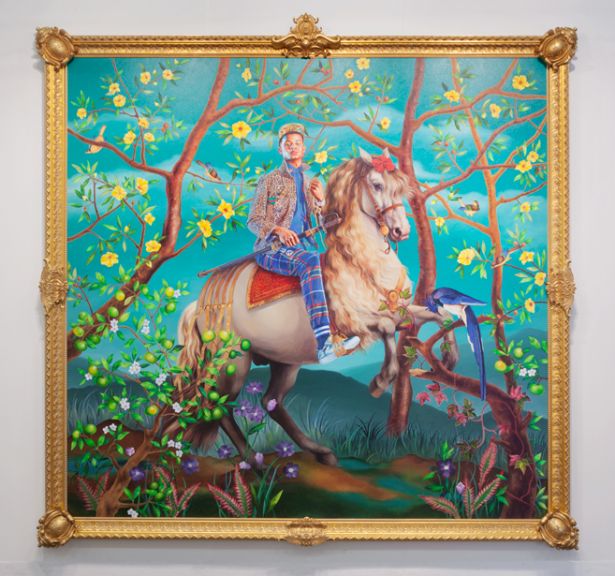 The Armory Show, now in its 22nd year and spread out along two piers abutting the always scenic Hudson River, kicked off its VIP preview on Wednesday with a quieter flurry of sales.

Free from last year’s badly timed blizzard that made entry into New York a major challenge, the only headwinds yesterday were the growing perception that the global art market is beginning to soften, at least from first-hand though hardly scientific impressions of a seasoned observer.

A bellweather of any international fair would be Paris/Salzburg uber dealer Thaddaeus Ropac, one of the 205 exhibitors whose lively stand, themed “The Space Age,” replete with works ranging from Richard Artschwager to Robert Rauschenberg, was unusually quiet in terms of sales on Wednesday. Artschwager’s blast off “Rocket” from 1971, executed in acrylic on Celotex and modestly scaled at 46.5 by 21 inches, sold for $350,000. Robert Longo’s impressive diptych, “Untitled (Cosmonaut Tereshkova, First Woman in Space)” from 2015, in charcoal on mounted paper and large-scaled at 94 by 48 inches, had a reserve from an undisclosed museum at $650,000, but hadn’t sold as of press time.

“We’re happy to be here,” said Ropac in understated enthusiasm. “I remember the first Armory Show in the hotel, so it’s almost a nostalgic feeling to support this fair and I love New York,” he added, referring to the fair’s cutting edge beginnings in 1994, organized by dealers Pat Hearn, Colin de Land, Paul Morris, and Matthew Marks at the Gramercy Park Hotel (in those days, the fair was known as the Gramercy International Art Fair).

Ropac also mentioned the quandary facing some art fair hopping dealers who show at both Armory and the May slotted Frieze New York fair on Randall’s Island, just two months away, in that you can’t bring the same type of material. For that reason, Ropac didn’t have any works by either Georg Baselitz or Anselm Kiefer.

That disappointed Miami super collector and art patron Marty Margulies, buttonholed along the wide aisles during the early afternoon VIP viewing, who said, “There’s nothing here for me. I’m concentrating on Arte Povera and Kiefer.”

But collectors certainly found other artists of interest as evidenced at New York’s Sean Kelly stand, where Kehinde Wiley’s bronze trio of African women, “Bound” from 2015 at 65 by 45 by 44 inches and from an edition of three plus two artist proofs, sold for $375,000, as did the artist’s grandly scaled and Old Master-styled “Equestrian Portrait of Philip III” from 2016, in oil on canvas and measuring 114 by 119 inches, which went for $300,000.

“It’s been extremely good so far,” said Sean Kelly. “And though I can’t claim to be a barometer of the entire art fair, the sales have been absolutely consistent with past years and very solid.”

The gallery also sold numerous works by Guadalajara-based artist Jose Davila, whose Pop Art styled reprises of Roy Lichtenstein bubble captioned, comic book inspired works from the ’60s proved irresistible to the market. All of the featured editions of four with one artist proof sold out, such as “Untitled (Drowning Girl),” an archival pigment print from 2016, which went for $37,500. Toronto collector Larry Wasser, who also serves on the board of the Andy Warhol Museum in Pittsburgh, was one of the Davila buyers.

“It’s a way to get ’60s art in contemporary times,” Wasser said.

One of the most exciting works at the fair, emblematic of what the Armory Show is supposed to deliver in terms of primary market works, is the fresh from the studio diptych by the LA-based Nigerian artist Nijideka Akunyili Crosby. The yet to be titled work at London’s Victoria Miro Gallery instantly sold to a major though unnamed New York museum for a high five-figure price. The artist literally brought the just finished, large-scale, multi-media work on paper to the fair the day before the opening.

The autobiographical piece, hung in the stand with large metal clips, features a striking self-portrait of the artist seated at a table, surrounded in part by illustrated medallions of her politician mother in campaign style finery, depicting her candidacy for a Senate seat in the Nigerian congress — the work pulsated with a kind of real-life vibrancy.

“We have about 18 big public museums on a waiting list for her work,” said Miro Gallery director Glenn Scott Wright, “and there’s a lot of buzz around her work.”

The gallery also sold Kara Walker’s “For Idioms of Negro Art, #1 folk,” from 2015, at an undisclosed six figure price.

The fair runs through Sunday, March 6.