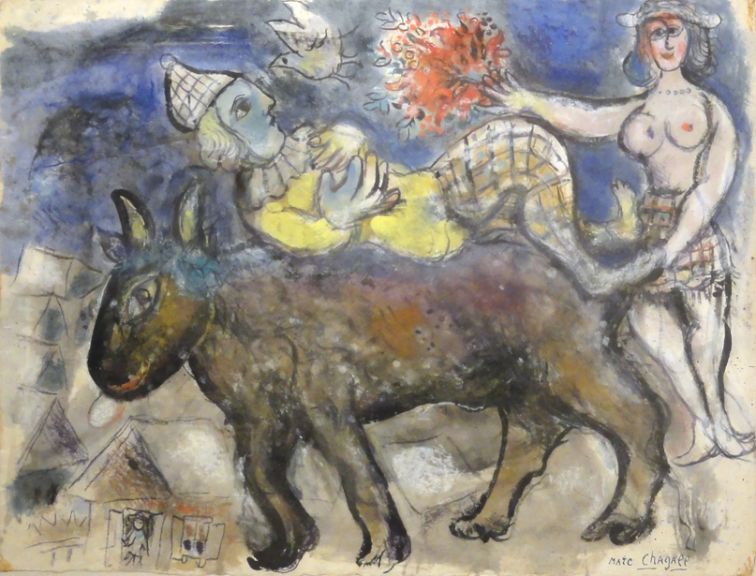 After the rather raucous, tire kicking action during the preview opening of the Armory Show Contemporary on Wednesday, the 56 galleries of Armory Show Modern, tucked away on Pier 92, became a peaceful refuge for unhurried viewing on Thursday.

The difference in atmosphere between the two sibling venues is always striking, and one doesn’t have to dodge zombie texters that seem to prefer roaming the more crowded aisles of Pier 94 where 114 contemporary galleries ply their mostly primary market stock and trade.

The Armory Modern pier, however, has its own energy, in a steady, middle age plus kind of way.

That slower view was appreciated at Bologna’s Galleria d’Arte Maggiore, where a dazzling grouping of Giorgio Morandi paintings and prints, as well as a striking Rene Magritte and a Marc Chagall gouache, punched all the right viewing buttons. With reserves on one of the Morandi oils and the Magritte painting waiting in the stand at an identical $2 million asking price, the gallery sold Chagall’s “Animal and Clown” from 1964, a charming gouache of a reclining circus figure nestled on top of a horned creature, to an American collector near the $800,000 asking price. Maggiore also sold a Morandi still life etching from 1946, “Grande natura morta circolare con bottiglio e tre oggetti,” for around $60,000.

There are always surprises at Modern, such as the combo artist booth of Joseph Beuys and Salvatore Scarpitta at the Innsbruck-, Monza-, and Milan-based Montrasio Arte. Scarpitta’s spectacular and used dirt track custom racer, “Sal’s Red Hauler Special” from 1966/67, powered by a twin Harley-Davidson modified engine and priced at $650,000, far less than what you’d pay for a run-of-the-mill vintage Ferrari, was a crowd pleaser. You can’t beat the provenance, since Scarpitta’s racer was sponsored by his dealer, the late and great Leo Castelli.

“We expected a little bit more on opening day,” said director Gianluca Bianco, “and we didn’t really connect with sales.”

“I like this fair,” said Horan. “It has energy and more European representation.”

The gallerist sold Vik Munoz’s collaged confection, “Three Flags, after Jasper Johns (Pictures of Magazines),” a chromogenic print from 2007 and scaled at 40 by 60 inches, which went for an otherwise undisclosed five-figure price. Horan sold the Munoz to a Texas collector and uttered a well-known art fair trade phrase for works that sell easily: “I could sell it five times over.”

The viewing landscape changed again at New York’s Michael Rosenfeld Gallery in a stand devoted to women artists, including a biomorphic hanging sculpture by Ruth Osawa, “Untitled” from 1953, in copper wire and just 14 inches by 16 ½ by 17 inches. It sold for an undisclosed price at the request of the publicity shy buyer.

Rosenfeld also sold early abstractionist Charmion von Wiegand’s nature painting, “I Ching series-Ta Yu: The Image of Fire in Heaven” from 1955, measuring 36 by 30 inches, which hit the region of the $380,000 asking price. In addition, the gallery sold two acrylic and graphite works on paper by Alma Thomas, both untitled from circa 1970, at $30,000 each to a single collector, and a small, 8 ½ inch high Dorothea Dehner abstract bronze from 1992, “Sancho Panza,” for around $20,000.

Rosenfeld, one of 24 dealers at Armory simultaneously showing across town at the ADAA’s Art Show, also sold a rare to market Beauford Delaney oil portrait there in the region of the $450,000 asking price.

Referring to the African-American, ex-patriot artist who moved to Paris in 1953, Rosenfeld said, “He’s not as yet known to the average collector of postwar art.”

Price points jump up and down at will as evidenced by the impressive array of prints at London’s Alan Cristea Gallery, led in part by Jim Dine’s jumbo-scaled “The Big Wall of Hearts” from 2002, a hand printed wood cut with extensive hand coloring on Somerset paper and scaled at 70 ¼ by 57 inches. It sold to a Canadian collector for $28,000. The gallery also sold numerous single square geometric works by Josef Albers from $9,000 to $12,000.

“We sold works by pretty much all of the artists,” said director David Cleaton-Roberts, “and perhaps not as frenetic as the last couple of years but still business is being done.”

Cristea also sold Sol Lewitt’s “Eight Cubic Rectangles (Diptych),” an etching with acquatint from 1995, near the $16,000 asking price, as well as Tom Wesselmann’s “Still Life with Lilies and Mixed Fruit” from 1997, a screen print in 26 colors on Coventry paper, for around $12,500.

More American art was featured at New York’s D.C. Moore, as two works on paper by Paul Cadmus sold: “The Poet” from 1932 in watercolor on paper and the wickedly witty “Still Life for a Gentleman’s Bathroom” in colored pencil on paper from the same decade. Each brought around $55,000.

Other Armory Modern surprises included the sale of a major David Hockney interior from 1976, which went for an undisclosed price at Stockholm’s Wetterling Gallery. Again, the price secrecy stemmed from the request of the buyer, who happened to be a fellow exhibitor at the fair.

Outsider Art was also in vibrant evidence at Philadelphia’s Fleisher Ollman, led by Bill Traylor’s masterly “Untitled (Women gossiping about Men Drinking)” from 1939-42 in graphite on cardboard, which sold for $195,000, as well as Joseph Yoakum’s exacting “The First Steam Engine to be assigned to the service of the Kansas City, Ft. Scott and Memphis Run” from circa 1960s, in graphite, colored pencil, and ballpoint pen on paper. It sold for around $20,000.

The gallery also sold Chicago Imagist artist Gladys Nilsson’s funky “Robotmen Beseiged” from 1969 in watercolor on paper for around $35,000.

The Armory Show runs through March 6 at Piers 94 and 94 in New York.