Skip to contentSkip to content
Blouin Artinfo
The Armory Show Contemporary Opens With a Flurry of Sales
March 9, 2015 by Judd Tully 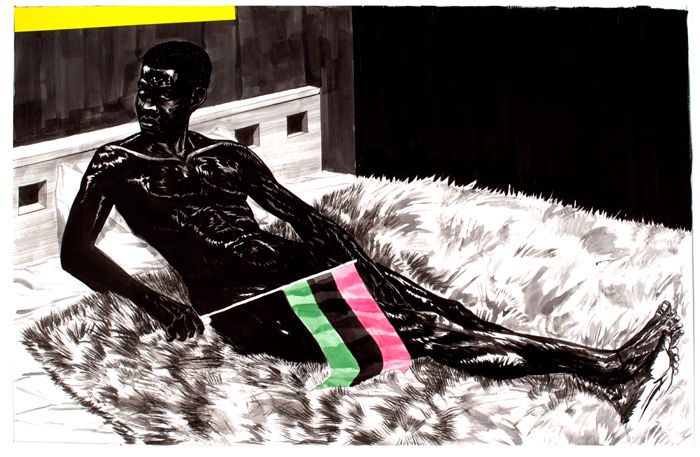 The V.I.P. promenade of the 15th iteration of the Armory Show, taking up the bird filled halls of Pier 92 and 94 alongside the frozen Hudson River, opened today with a seasonal flurry of sales.

Leaner and meaner this year with “just” 199 galleries from 28 countries, the larger and more heavily trafficked contemporary component aptly demonstrated that art fair fatigue has been placed on hold or those still suffering from it have entered rehab. Before a line was formed for checking coats and bulky bags, sales were clicking along at Paris/Salzburg Thaddaeus Ropac.

Nearby, at London’s Victoria Miro Gallery, a large-scale and exotic landscape by Chris Ofili, “Last Light, First Flight” from 2008, in paper collage on canvas, sold in the high six figures. “It sold right off the bat,” said director Glenn Scott Wright, noting that the recent New Museum Ofili survey “finally got people past the dung paintings of the ’90s.”

Museum exhibitions definitely stoke the market for recently featured artists as also evidenced by Kehinde Wiley’s “Portrait of Natasha Zamor” from 2015, at New York’s Sean Kelly Gallery, which sold for $125,000. It was scaled at 72 by 60 inches and features one of the street found models Wiley sources and celebrated at the current Brooklyn Museum show of 40 paintings. The gallery also sold Antony Gormley’s standing, 74 inch-high figure “State XIII” from 2012, in cast iron for £350,000 and Marina Abramovic’s horse mounted “The Hero I” from 2001, a framed color photograph for €90,000.

At New York’s Jack Shainman Gallery, another new gallery artist, the Iraqi painter Hayv Kahraman, currently enjoying a solo there in Chelsea, was represented at the stand with “Hapool Meshkhor,” a new painting scaled at 100 by 79 inches in oil on linen and exclusively focused on a female figure, went for $75,000. The more established and first-rate Kerry James Marshall, ”Study for Bed Man” from 2013, done in ink wash and collage and depicting a nude black man on a fur covered bed with an African flag, in a kind of brilliant reprise of the famed Goya “La Maja desnuda,” c. 1797-1800, quickly sold for $42,000. The gallery also sold Nick Cave’s spacey and post-Spock-like “Soundsuit” from 2011, in mixed media including shopping cart, buttons, upholstery, metal, and mannequin, for $125,000.

In those early V.I.P scouting hours, the general atmosphere was calm and bubble like, without much hysteria, apart from one observed moment in the wake of an upset collector who very much wanted dibs on a hard to source Mickalene Thomas painting at LA’s Suzanne Vielmetter, where Thomas’s “Portrait of Qusuquzah #6” from 2015, set in rhinestones, acrylic, oil, and silk screen on wood panel, sold to an otherwise unnamed American institution for $65,000. It was one of the standout pieces in the fair, showing the artist’s expanded use of collaging and painting on the surface in a kind of Cubist styled approach, capturing a woman in profile. The dejected suitor made a loud fuss but moved on.

The mood was lighter at New York’s 11 Rivington, which experienced a small avalanche of early sales in the comfortable price range of approximately $5,000-20,000 and ranging from unique, small scaled laser toner on paper abstractions by Marsha Cottrell, such as “Spectral Sun” from 2014, to Volker Huler’s large-scale, 74 by 52 inch etching “Lost in the Stars V,” from 2014, and Evan Nesbit’s acrylic, dye, and burlap abstraction “Untitled,” from 2015. The Lower East Side gallery also sold works by Mika Tajima in spray enamel and thermo formed acrylic in the $13,500-20,000 range.
Concentrating on more emerging artists, at least on this promenade, there was more activity at New York’s Fredericks Freiser, as recent Yale grad Mark Thomas Gibson, currently better known as Kara Walker’s ace studio assistant, had three text based paintings on view, including “Search Light” from 2015, which sold for $8,500. In stenciled-like letters and mashed up with other poached images, the painting reads “Some monsters loom large,” a great phrase for the current market. The gallery also sold photo-realist styled, faux Surreal works on canvas by Jocelyn Hobbie in the mid-$20,000 range, including the sexy “Kitten,” from 2015, at 36 by 24 inches.

Fitzrovia dealer (as in London) Josh Lilley enjoyed great success with his stand of still underknown artists, including a sassy, Louise Bourgeois-like floor sculpture by Kathleen Ryan, “Bacchante Reclining” from 2015 and aggressively potent in concrete, marble, and stainless steel. The silvery blue grouping of balloon-like forms tethered together like convicts on a chain gang sold for $18,000. Lilley also sold a group of figurative paintings by Aliza Nisenbaum, who was recently featured in a White Columns show, with works depicting Central American families the artist befriended in Queens. The evocative portraiture mix of Diego Rivera and Alice Neel, perfumed to the plight of paperless but hard-working immigrants, injected a heady gravitas to the work. “Gloria, Angelica, Jessica,” executed in oil on linen from 2014 and scaled at 51 by 33 inches, sold for under $10,000.

Amidst the low-octane hubbub, a performance artist gracefully skateboarded along the aisles on an electric contraption resembling a flying carpet, complete with fringe — the performer was decked out in a skull cap and caftan-like costume. It added a light and enjoyably Surrealist touch to the Armory Show.