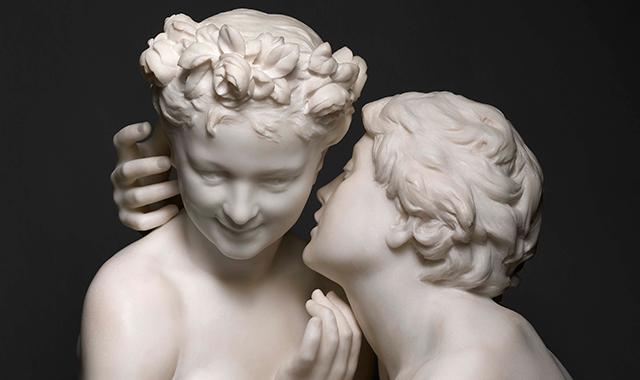 A marble statue of Daphnis and Chloe by Jean-Baptiste Carpeaux

MAASTRICHT — The quarter-century-old European Fine Art Fair, better known by its acronym TEFAF, opened to the general public in this historic Dutch city on Friday following a day long VIP vernissage on Thursday. Unlike any other world-class fair, TEFAF Maastricht 2013, packed with vetted material ranging from classical antiquities to contemporary art, runs for ten days (through March 24), taking some of the urgency out of making instant buying decisions. It is a slower paced affair, where one sees more canes and stooped shoulders, good indicators of the seasoned connoisseur.

The Old Master painting roots of the fair showed early on as London dealer Johnny van Haeften sold a small-scale and rare Paul Bril oil on copper, “Saint Jerome praying in a rocky landscape” (1592), for approximately £750,000 to the Mauritshuis, an important Dutch museum. (Like a number of works at TEFAF, this one had recently sold at auction, going for £505,250 at Christie’s London in December. It also sold at auction at Sotheby’s London back in March 1969 for £6,600.)

It was a strong opener for van Haeften, a veteran TEFAF exhibitor, as he also sold Jacob Jordaens undated Homeric painting from the 1630s, “The meeting of Odysseus and Nausicaa,” for $6.5 million, according to the gallery. Van Haeften acquired it at Christie’s London in December 2012 for £2.1 million.

Museum curators and trustees were on the prowl in the vast den of TEFAF, whose aisles bear such provocative names as Madison Avenue and Faubourg Saint Honore, letting you know luxury shopping was the main criteria. The storied Rijksmuseum, about reopens next month after a decade-long refurbishment, was strongly interested in one of the fair’s highlights, Jan Mostaert’s 16th-century “Landscape with an episode from the Conquest of America” at London/New York’s Dickinson Gallery, which carried a $14-million price tag. “We are decidedly optimistic and they want to buy it,” said the gallery’s Hugo Nathan, “now they only have to come and sign on the dotted line.”

The work is reputed to be one of the first depictions of the New World, though that presumption might be difficult to prove. At any rate, the naked “natives” running through the landscape looked decidedly European. (It also happens to come from the restituted Jacques Goudstikker collection.)

Optimism is a large part of every art fair and it’s always difficult to know what will happen. There were different early readings from veteran exhibitors, including Jonathan Green of London’s Richard Green, who said, “We had a strong first day across the board, from Old Masters to Impressionists, and up to one million euros in price.”

Green added, “It’s the best first day we’ve had in years,” indicating the gallery sold seven works ranging in price from €100,000 to €1 million, including a Pierre Bonnard painting of a young woman at breakfast from 1918, and a Salomon Ruisdel river scene. Each was approximately one million euros.

Asked about buying mood, Green noted, “People are thinking: ‘What am I going to do with my money?,’ and this is a good place to invest.”

But the atmosphere was different at New York/London’s Waterhouse & Dodd as principle Ray Waterhouse minded his stand, which included a first rate John Singer Sargent “Portrait of John Ridgely Carter,” featuring a dapper gentleman and priced at $1.9 million, and Pablo Picasso’s “Le Peinture,” a late self-portrait from 1967 priced at €2.85 million. “There doesn’t seem to be the same urgency,” said Waterhouse, describing the slower mood. “We had a quieter day yesterday [the vernissage] than last year when we sold ten pieces. “

Waterhouse, who also indicated he brought more expensive kit this time, also mentioned an elderly client who had consigned a painting to the stand and promising to buy another work if his piece sold. “So if we sell one, we sell two,” said the bemused dealer.

The London-based Tomasso Brothers Fine Art also had a successful preview day, making five sales including a bronze by Giuseppe Piamontini (1664-1742), “Milo of Croton.” It was sold to a European private collector, with the asking price said to be in the region of €650,000.

Referring to the Atkins, Kraus repeated a favored dealer mantra, “I could have sold it several times.” Still, he marveled at the lively atmosphere, adding, “I don’t think we’ve ever sold anything here on opening day.”

Kraus also had bigger game in the gallery, including a spectacular, personal photo album, known as the Norman Album, by Julia Margaret Cameron, comprised of 75 albumen prints from 1864-1869 and priced at $6.5 million. The photographer gave it to her daughter Julia and son-in-law Charles Norman as in appreciation for their gift of her first camera.

At almost every turn, TEFAF is filled with such gems, like the painted pink bathroom cabinet of Gerrit Thomas Rietveld, which sold for an undisclosed sum at Berlin’s Ulrich Fiedler and was sourced from the artist’s own apartment. It’s hard not to feel the excitement of a fairgoer discovering something wonderful — and probably expensive.

Another one of those superb works, Jean-Baptiste Carpeaux’s “Daphne et Chloe,” full-figured in exquisitely carved marble and signed and dated 1874, sold at London’s Daniel Katz Gallery to an American museum against an asking price of $3 million.

There was also considerable action in the so-called Modern section, the real estate that most resembles the Art Basel fair in Switzerland. At New York’s Sperone Westwater, the gallery sold a handful of works, including Carla Accardi’s “Rosso Scuro,” a shaped abstraction in enamel on sicofoil, a type of clear plastic from 1974, in the €200,000 range.

“It sold to a new European client for us,” said gallery partner David Leiber, “who has been looking for an Accardi and stopped in his tracks when he saw it.”

Sperone Westwater also sold Zero Group artist Otto Piene’s “Untitled” (Raster Bild) painting in textured yellow from 1957-1958 in the six-figure range to an important German collector of the movement, and the wildly Baroque, photo-realist looking painting of an ornate sitting room with a woman in a sleeveless white dress, “Dream of Drowning” (2010-12) by Jan Worst, for €125,000.

The gallery also sold a new work by the Tehran-born painter Ali Banisadr, “Paper tiger,” a small, vividly colored 16-by-16-inch abstraction from 2013 for $18,000. Banisadr will have a solo at the gallery in November. “You’re always surprised who’s passing by this fair,” added Leiber, “and the cross-over effect [of different art categories] is amazing.”

Fair veteran Christophe van de Weghe sold Pablo Picasso’s “Homme au cahpeua” (1964) in oil and ripolin on canvas for $8 million to a European collector, as well as Roy Lichtenstein’s mixed-media collage on board “The Den” (1990-96) for approximately €525,000. Referring to the buyer of the latter, van de Weghe, who participates in art fairs around the world, said, “I’ve only seen him in Maastricht and nowhere else.” Sounding rather old-fashioned but happy, the dealer added, “This is a fair where the wife can buy some jewelry and the husband can buy a painting. People like to come here.”

At Gagosian Gallery, absent here since a stand in 2006, sold a yet-to-be-titled Rudolf Stingel painting of Pablo Picasso. Appropriated from a little-known 1932 photograph by Albert Eugene Gallatin, the Cubist legend looks natty and confident in a double-breasted suit, casually smoking a cigarette. The painting sold in the seven-figure range. Adjacent to the Stingel, and separated by a wall, four real Picassos jousted for attention at Gagosian’s stand.

There was also postwar action at Antwerp’s Axel Vervoordt Gallery, as the Gutai group Japanese artist, Kazuo Shiraga, who practiced his AbEx form of painting often suspended from the ceiling in order to paint with his bare feet, found a new home for the brash, black-and-red abstraction “Chizosei Shomenko” (1961) for approximately €1.2 million.

With another nine days to go, there’s bound to be more action.