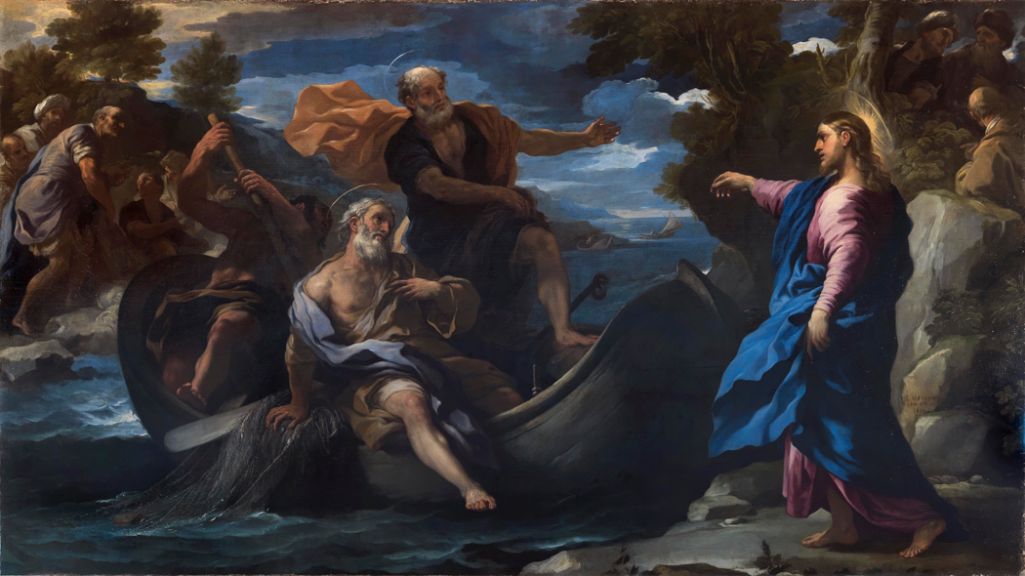 Luca Giordano’s “The Calling of Saints Peter and Andrew,” 1690, sold at the Colnaghi Gallery booth at TEFAF 2016 to a European collector in the region of its €2 million asking price.
(Courtesy Colnaghi Gallery )

MAASTRICHT, The Netherlands — The European Fine Art Fair, better known as TEFAF, the largest and most prestigious combined category fair on the continent, opened its 29th iteration here Thursday morning to a conservative looking scrum of V.I.P. cardholders.

Against a background of the just released annual TEFAF Art Market Report that pegged global sales for 2015 at $63.8 billion, down 7 percent from 2014, and amidst considerable dealer chatter about the newly formed events TEFAF New York Fall and TEFAF New York Spring, which will debut at the Park Avenue Armory in October 2016 and May 2017 respectively, a number of early transactions took place across the breadth of TEFAF’s some 270 art and antiques dealers.

Since the seasoned fair is probably best known for its Old Masters painting section, the headliner would be the stunning picture by Dutch Golden Age painter Roelandt Savery, “A Still Life of Flowers in a Vase, in a stone niche within a trompe l’oeil frame” from 1615, which sold at London’s Colnaghi Gallery to the Mauritshuis museum in the Hague, home to the Royal Cabinet of Paintings, for €6.5 million. The artist’s signature and date of the painting is “carved” into the trompe-l’oeil base of the stone niche. The work was acquired with funds from the BankGiro Lottery, the Rembrandt Association, and an anonymous private individual.

It was a red-letter day for Colnaghi, empowered by its recent merger with the Madrid/London dealership Coll & Cortes, which has taken over from the renowned Konrad Bernheimer, who will remain as chairman. The booth realized half a dozen sales.

Apart from the Savery, which sold just days before the fair but was only announced this afternoon (with much ado), Colnaghi sold Luca Giordano’s massive, drama filled painting “The Calling of Saints Peter and Andrew” from 1690, measuring 230 by 410 cm, to a European collector in the region of its €2 million asking price.

The gallery also sold a mid-17th-century painting by the otherwise anonymous “Master of the Annunciation to the Shepherds,” a 49 ½ by 70 inch oil on canvas, to another European private in the region of €1.8 million, and a brilliantly carved trio by Georg Petel also dating from the 17th century, “Christ and the Two Thieves” in boxwood and each six inches high, in the region of €800,000.

Another sculpted standout was Gregorio Fernandez’s “Saint Benedict of Nursia” in polychromed wood and standing 12 inches high, which Colnaghi sold to an American collector in the region of €450,000.

Paris gallery Talabardon & Gautier showcased its rare and fabulous early Rembrandt van Rijn, “The Unconscious Patient (Sense of Smell)” from circa 1624-25, which had sold before the fair to collector Tom Kaplan of the New York-based Leiden Collection for an otherwise undisclosed seven-figure price understood to be in excess of €2 million. The gallery spotted the richly colored oil at a sleeper auction in New Jersey last September, when it paid $800,000 against a persistent underbidder for the then unattributed work that carried an estimate of $200-300, according to dealer Bertrand Gautier.

Asked why he was exhibiting a painting at TEFAF that had already sold, Gautier said, “Because it’s a symbol of my job and what I do best, to discover pictures and bring it to the attention to people who have a good eye and a lot of taste.”

The 17th century also proved ever popular at Amsterdam-, Paris-, and New York-based gallery Haboldt Pictura Fina Arts, which sold a Surreal looking “Still life with an Ivory goblet, pears, nuts, and a knife on marble sculpted table” by the German painter Georg Hinz for €245,000.

“It goes from one castle owner to another,” said Robert Haboldt, and he wasn’t kidding.

Still in the 17th century, London’s Stephen Ongpin Fine Art, one of 20 galleries stationed in the freshly restyled second-floor Works on Paper section, sold Jacob Adriaensz Backer’s “A young Boy in a plumed cap” in black chalk with traces of red chalk and framing lines in brown ink, and measuring 6 5/8 by 7 1/8 inches, for €11.000.

The gallery sold another Rembrandt influenced work, Govaert Flinck’s “Portrait of a Painter,” possibly a self-portrait in pen and brown ink, with brown ink framing lines and (bonus) three or four figures faintly sketched in black chalk on the reverse, measuring 6 1/2 by 5 3/8 inches, for €70,000.

Going back further in time, New York’s Merrin Gallery realized a number of early sales at its repositioned stand, including a Post-Sasanian, Umayyad Period, circa 8th-century A.D. gilt silver wine vessel with engraved bird motifs for $275,000, and a striking, standing female figure from the Egyptian Middle Kingdom, Dynasty XII, from 1900-1820 B.C. in granite and just 12 inches high, which went for $225,000.

“You never know who you run into at this fair,” said Sam Merrin, “but they come to buy and don’t kick tires.”

“I’ve never seen anything like this in the first hour,” he added. “It was fun.”

Merrin also sold a North West Coast American “Shaman’s Rattle: male figure riding on raven” from the 19th century, in wood and twine, for approximately $80,000 to a fellow exhibitor who bought it for his private collection.

In that same vein, the gallery also sold a late Symbolist work by Edgard Maxence, “Rosa Mystica (The Mystery of the Rose)” from 1918 and measuring 64 1/4 inch in diameter, in the region of $450,000. The Maxence was in perfect condition and still housed in its original frame, according to Jack Kilgore, who said the gallery sold five works during the day-long vernissage.

The pace of sales seemed notably slower on the so-called Modern side of the fair, though seasoned New York dealer Christophe van de Weghe sold Robert Mangold’s trapezium shaped 96 by 119 inch abstraction “Plane/Figure VI” from 1992, in acrylic and pencil on paper, for $650,000 to a European collector.

“It went to someone who I know but I’d never done business with,” said the dealer.

Van de Wegh, who will jet to Hong Kong next week for Art Basel Hong Kong and does seven such events a year, said, “I am the master of fairs. I love them.”

At the booth of Paris-, Cologne-, and St. Moritz-based Karsten Greve, one of the long-standing and great European postwar dealers, the gallery sold a large, glazed, and polychrome terra cotta Lucio Fontana vase, “Concetto Spaziale” from 1952, in the region of €350,000.

Though it had as yet found a new home, the gallery was showcasing Cy Twombly’s magisterial and huge “window” painting, “Untitled (Gaeta)” from 2004, in acrylic on wood panel in the artist’s pale gray frame and bearing an €18 million asking price. It is one of the most expensive offerings in the postwar section.

“I like to show things here that people don’t get to see anywhere else,” said Greve.

The Twombly hasn’t been seen in public since it was exhibited and sold at the Gagosian Gallery in London. “It will either go to a lucky buyer,” added the dealer, “or back to my house in Paris.”

The fair runs through Sunday, March 20, so there’s plenty of quality time for more viewing and buying.