Skip to contentSkip to content
Blouin Artinfo
Out of the Gate: What ABMB Buyers Had to Have on Day One
December 5, 2013 by Judd Tully 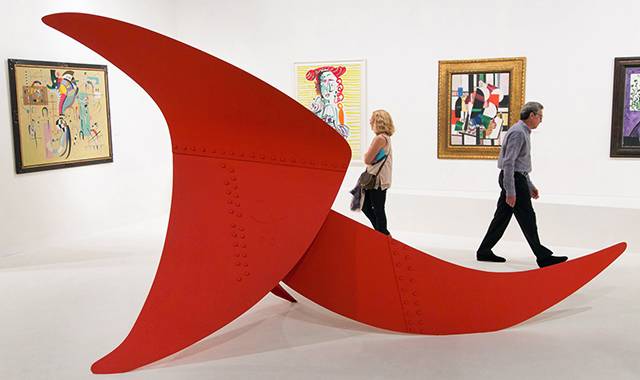 The 12th edition of the Art Basel in Miami Beach art fair opened to VIP cardholders on Wednesday, and, in barely two hours of Black Friday-like shopping, racked up many millions in sales.

Almost at once, David Zwirner Gallery sold a Jeff Koons sculpture that wasn’t even physically present at its booth for $8 million dollars, according to the gallery — an instant though phantom top-lot transaction. The gallery declined to provide other details.

At New York’s Van de Weghe Gallery, early sales included Gerhard Richter’s color-saturated and squeegeed “Abstraktes Bild (595-3),” 1986, which sold in the region of the $3.2 million asking price to an American collector, and a 2005 Damien Hirst spin painting embedded with two expired credit cards — “Beautiful, I Pushed the Controls and Ahead of Me Rockets Blazed, I Don’t Want to Be a Dead Artist Painting” — for $580,000. Jean-Michel Basquiat’s fiercely drawn “Head,” 1985, also sold, for approximately $580,000.

Other early seven-figure sales included a new Georg Baselitz patinated bronze, “Louise Fuller,” 2013, which Galerie Thaddaeus Ropac of Paris and Salzburg said it had sold to a private American collector for $2 million, and, at Pace Gallery, a wind-driven Alexander Calder “Untitled” standing mobile from 1962 that went for more than a million dollars.

And over at New York’s Helly Nahmad, Calder’s fire engine–red 1970 “Brontosaurus,” dominating the center of the stand and bearing a non-prehistoric $12 million price tag, had had a so-called “reserve” placed on it.

Sales at lower altitudes were more plentiful, for example at Sprüth Magers of Berlin and London, where Sterling Ruby’s large-scale spray painting “SP256” sold for $550,000 and Barbara Kruger’s digital print on vinyl “Untitled (Don’t Shoot),” 2013 — which pictures someone holding a miniature, non-digital spy camera overlaid with blocky text — went for $275,000. Several found-object sculptures by Cyprien Geillard, encased in elegant vitrines, also sold, at 40,000 euros each — including “Untitled (Tooth),” 2012, a single tooth from an excavator bucket, resembling an archaeological artifact.

“The first two hours [of the fair] have been very good,” says Sprüth Magers’s London director, Andreas Gegner. “People are very quick. They research and pick beforehand in order to close deals.”

The blown-up images of sections of a five-euro note attracted strong interest, and according to Odermatt, “you’re going to hear a lot more about this artist.”

Politically potent work was also in demand, like Ai Weiwei’s beautiful “Jade Handcuffs,” 2012, which sold for 70,000 euros at London’s Lisson Gallery. Ai’s “Forever,” also from 2013, a large sculpture comprised of two rows of six bicycles, also sold at the booth, for 250,000 euros.