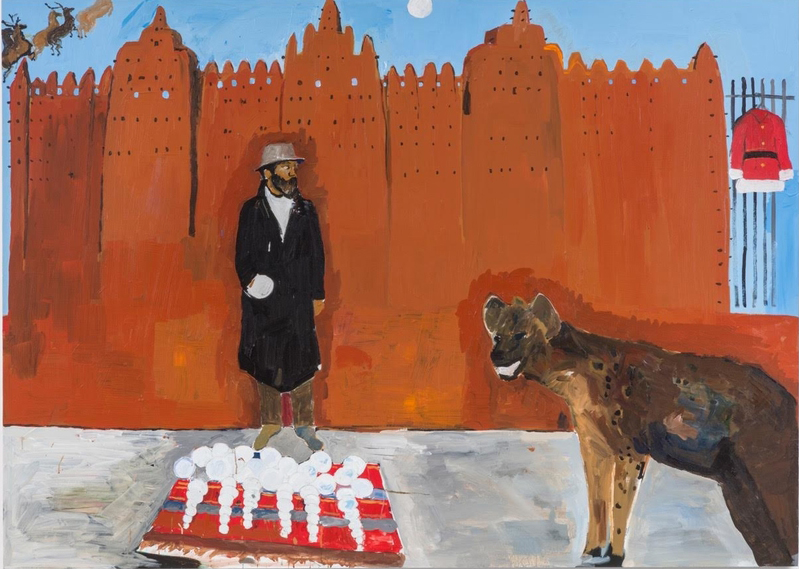 Miami Beach—Talk of prices paid for various artists at mega-fairs like Art Basel in Miami Beach is a familiar form of art world patois — a kind of commercial mating call, even, for certain denizens of the art market. But even in the midst of this all this babble, some acquisitions stand out and deserve a closer look.

That became apparent in the wake of Wednesday’s V.I.P. preview at ABMB, when the husband and wife team of Steve Wilson and Laura Lee Brown, creators of the boutique hotel empire 21 C Museum Hotels, descended on the fair and bought a dozen works from nine different galleries.

Their hotel/museum mini-chain, which started in Louisville in 2006 and has since expanded to five other cities (including Bentonville, AR, home of the Crystal Bridges Museum), with three more under construction, features circulating contemporary art from the couple’s collection.

“I’m not finished yet,” Steve Wilson said in a phone call just after buying “Sparrow’s Deli,” a life-size, hand made fabric iteration of a working deli by the London artist Lucy Sparrow, from the Lawrence Aiken Gallery at Scope. “The thrill of my job is that we continue to have new museum hotels we’re designing, and that gives us more opportunity to fill them with art, so it’s fun.”

By the looks of it, Shainman has had a great fair so far. Besides the Mosse photograph that went to Wilson and Brown, he sold Kerry James Marshall’s “Untitled (Curtain Girl)” from 2016, a 30-by-24-inch acrylic painting on PVC panel, for $600,000. The painting depicts a dark-skinned woman standing behind and framed by a luminous and transparent curtain, seemingly illuminated by myriad tiny starburst lights, which partially obscures her features.

Marshall’s career retrospective, “Kerry James Marshall: Mastry,” is currently drawing crowds at the Met Breuer in New York, and his work is in great demand. The appearance here of this large and beguiling work fresh from the artist’s studio was something of a coup for Shainman, who has represented Marshall since 1997.

Though Shainman described the V.I.P. opening on Wednesday as “gentler” than other years, he also noted that “it was probably one of the best first days I’ve had ever — we sold a lot of really top pieces.”

Other examples included a new figurative work by Lynette Yiadom-Boakye, “Sing Songs to Any Sinner” from 2016, a 79-by-47-inch oil-on-linen painting depicting a man seated and reading a book on a patterned sofa, which sold for $110,000, and two large paintings by Nina Chanel Abney, representing her debut at the gallery.

Blum & Poe of Los Angeles, New York and Tokyo, has also been seeing steady action, led by Yoshitomo Nara’s large-scale, epically touching “Broken Heart Bench” from 2016, featuring a forlorn girl in grand scale at 113 by 89 by 6 inches in acrylic on wood, which sold for $1.2 million. The gallery also sold Henry Taylor’s acrylic-on-linen homage to David Hammons, “Hammons Meets a Hyena on Holiday” from 2016, depicting the older artist in one of his storied performance art/street pieces (“Bliz-aard Ball Sale” from 1983, in which he sold snowballs on a throw rug in front of the Cooper Union), confronted by a grinning hyena, for $70,000. Taylor is red hot at the moment, and was recently chosen for the 2017 Whitney Biennial.

There were other sales of note at New York’s Paul Kasmin Gallery, where Lee Krasner’s late Ab-Ex composition “Another Storm” from 1963, a wall-consuming work at 94 by 176 inches, sold for $6 million. Kasmin just began representing the artist’s estate; according to the catalogue raisonné, the painting hails from the Pollock-Krasner Foundation, the charitable entity founded at the bequest of Krasner a year after her death in 1984.

A note on “Another Storm” in the catalogue raisonné, written by Ellen Landau, speculates that Krasner might have titled the painting in reference to her childhood fear of thunder, or perhaps to the famous drunken outbursts her husband, who died a few years before it was painted and whom she quoted as saying “think of it as a storm: It will pass.”

The painting was first exhibited at the Whitechapel Gallery in London in 1965-66.

The gallery also sold a figurative and decidedly Surreal composition by William N. Copley, “Under the Stars (Hommage à Picabia)” from 1994, a 40-by-32-inch work in acrylic and lace on canvas, for $185,000.

It was a timely title, given the blockbuster Picabia retrospective that recently opened at the Museum of Modern Art.