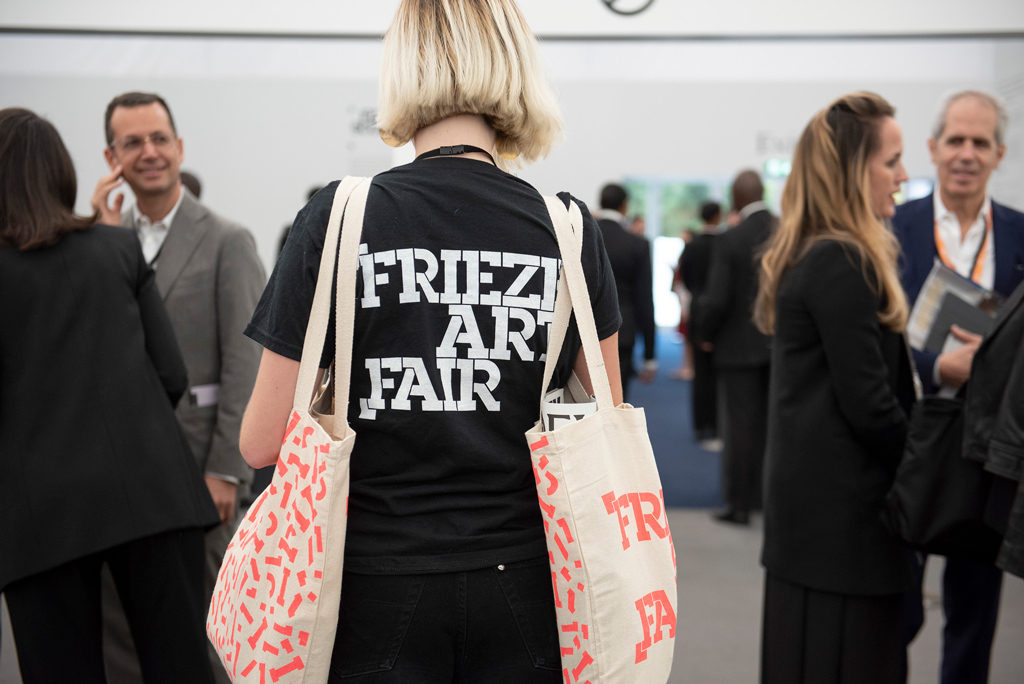 View of the scene at Frieze London 2018. ©LINDA NYLIND/COURTESY FRIEZE

The latest iterations of Frieze London and Frieze Masters, artfully bivouacked in separate bespoke white tents at opposite ends of Regent’s Park in London, opened on Wednesday to a first tranche of VIP guests, and racked up a steady, though hardly volcanic, stream of sales.

To begin in the Frieze London tent, which was lined with 160-plus galleries: freshly minted works at Los Angeles’s Night Gallery made a swell impression. Mira Dancy’s triangle-shaped and large-scale painting Toxic (2018) sold for $36,000, while a painting by the French artist Claire Tabouret, Duel in Sun (Bronze), also 2018, of two figures seemingly wrestling, sold to an Italian collector for $33,000. And a strong, mixed-media composition, Tandem Green, by the New York–based artist Derek Fordjour, with two uniform-clad figures seated in identical white chairs, their hands modestly poised on their laps, sold for $18,000.

There were discoveries to be had at Chicago’s Kavi Gupta, which was showing rare works by AfriCOBRA artists, who are making big waves in the traveling show “Soul of A Nation: Art in the Age of Black Power,” now on view at the Brooklyn Museum. They sold in the opening minutes for prices ranging between $50,000 and $250,000, including the punchy and Pop art–infused Family (1971), by one of the movement’s founders, Gerald Williams, which was priced at the higher end of that range.

It was Gupta’s first London art fair, and he made the most of it by also showing a new wall-popping composition by the 29-year-old Philadelphia-based artist Devan Shimoyama, who has a solo exhibition opening next week at the Warhol Museum in Pittsburgh, at the same time that everyone will be in town for the Carnegie International. Weed Picker (2018), a mixed-media work on canvas measuring 84 by 72 by 3 inches, sold to a collector with homes in both the United States and United Kingdom for a price between $40,000 and $60,000. The dealer didn’t want to be more precise than that but said that Shimoyama “has taken off like crazy.” 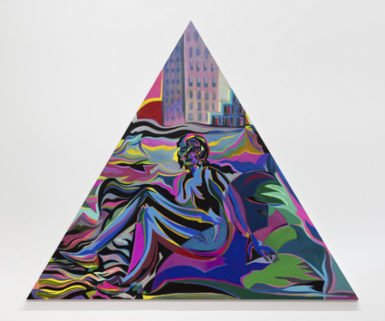 Gupta also instantly sold a stunning new untitled portrait of a black woman with her hair wrapped in bright red fabric by Firelei Báez, housed in a sculpted white frame for between $65,000 and $85,000. The Dominican-born artist currently has a solo exhibition, “Joy Out of Fire” at New York Public Library’s Schomburg Center for Research in Black Culture that was organized by the Studio Museum of Harlem.

At Lehmann Maupin, which just opened a new location in New York and also has spaces in Hong Kong and Seoul, a solo presentation of the Brazilian twin brother duo OSGEMEOS went swimmingly, with at least four works in lively formats of acrylic, spray paint, and sequins on board selling, including Someone to Share the Dreams at between $130,000 and $180,000, It Is Never Enough in the same price range, and the largest, The Lyrical, at $150,000–$200,000.

Those numbers may sound like auction estimates, but some dealers prefer to announce sales this way.

At New York’s Jack Shainman Gallery, the dealer sold all three Nick Cave “Soundsuits” he had on view—standing, couture-inspired, wickedly crafted costumes priced at $150,000 each. The gallery also sold Hayv Kahraman’s decidedly X-rated and brilliantly bold Pussy Donation Box (2018), measuring 14 by 18 by 5 inches, for $9,500, and a related work, also in oil on linen, but featuring a woman’s face in profile, Donation Box, for the same price.

“I feel like I have a Courbet here,” Shainman said, referring to Kahraman’s Pussy Donation Box, as well as the infamous 1866 painting by Gustave Courbet, The Origin of the World (whose model, as it happens, was just identified by a French scholar).

Somewhat surprisingly, Shainman did not have a work by Kerry James Marshall this round, nor did David Zwirner, who opened a major, stunning Marshall solo show at his Mayfair gallery on Tuesday night.

“Kerry’s been very good to us,” said Shainman, who has been representing Marshall since 1993, well before the artist’s meteoric rise to art-world stardom, “but you can’t be harassing artists all the time for work.”

Although art fairs usually seem to exist in a kind of happy bubble protected from real world troubles (severe recessions notwithstanding), the looming shadow of Brexit seemed difficult to avoid as a topic of conversation, though it is, as yet, impossible to quantify its effect. The picture may be clearer next October when Britain reverts to being a more lonely island nation. 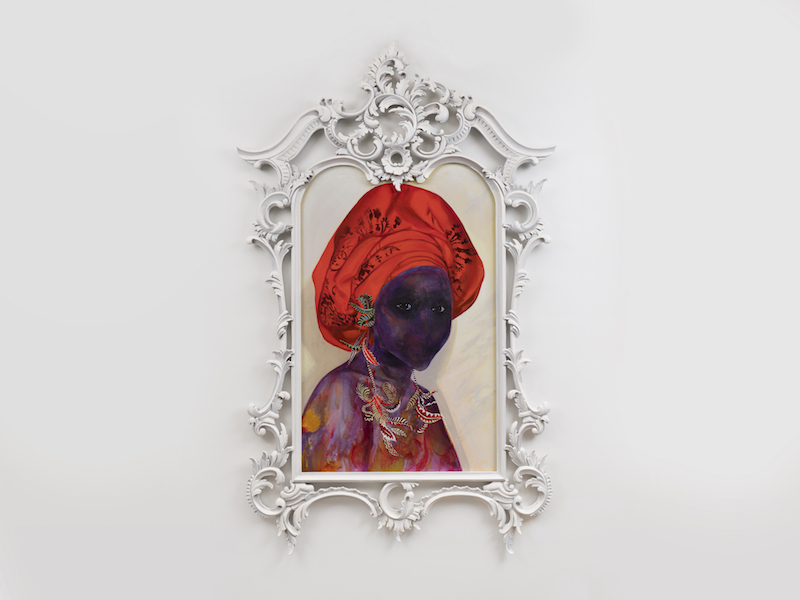 But speaking of shadows, the reign of Trump couldn’t be missed at Galerie Thaddaeus Ropac. In a small but powerful untitled painting from 2018 by Adrian Ghenie, the orange hair of POTUS stood out, despite the work’s smeary surface. It sold for €200,000 (about $230,000).

Nearby, at the multinational Pace Gallery, which also represents Ghenie, another untitled and identically scaled work from 2018 sold for $200,000, this one purportedly based on the visage of CNN star Anderson Cooper. 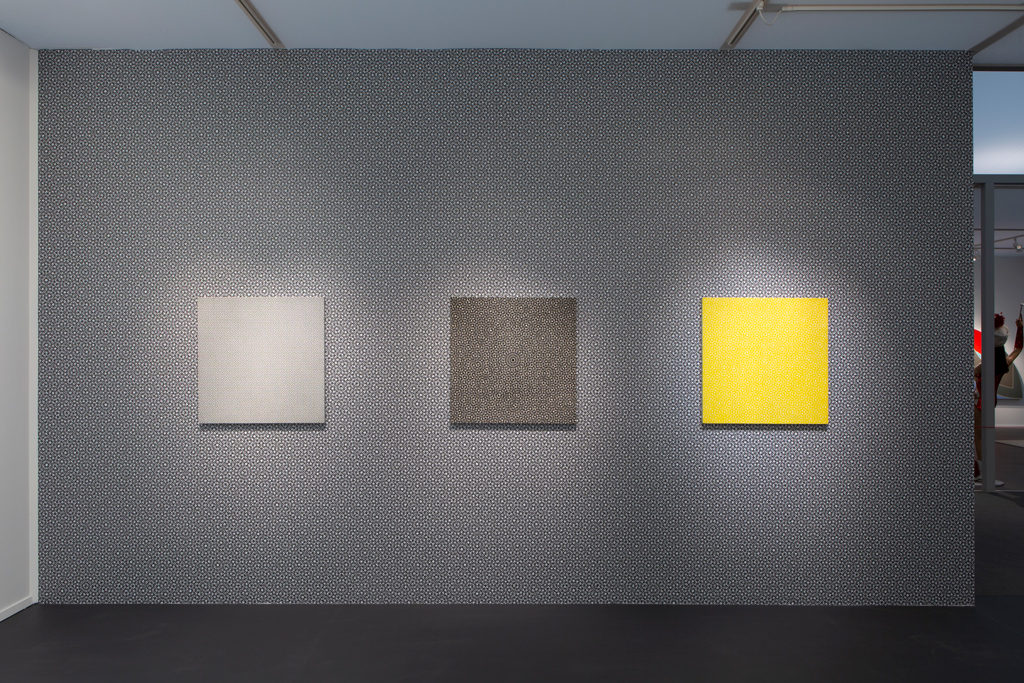 Over at Frieze Masters—reached by a remarkably pleasant stroll through the manicured landscape of Regent’s Park, dotted with sculptures for Frieze—London’s Robilant + Voena sold a stately yet ravishing, 18-inch-high plaster by Canova, Bust of Caroline Murat, nee Bonaparte (circa 1810–12) for around $1 million dollars to a Korean art collector and a beautiful, 18th-century Tiepolo painting, Portrait of a Young Page, bust length for less than a $1 million to a European collector. (Contemporary-minded viewers could be excused for thinking that rare Canova resembles a Janine Antoni white chocolate piece.)

The gallery also specializes in Italian avant-garde and postwar works and mixed its stand with the very different likes of Lucio Fontana and Enrico Castellani. As of midday on Wednesday, it had sold a page-sized, single-slash, and deeply blue Fontana Concetto Spaziale Attese (1964) for $500,000.

New York and London powerhouse Lévy Gorvy collaborated with Paris-based dealer Kamel Mennour for one of the more revelatory stands, a solo presentation of the French Conceptual artist François Morellet. The dealers brought in noted curator Beatrice Gross to arrange the geometric abstractions as a kind of mini reprise of the Dia Art Foundation’s 2017–18 exhibition of the artist’s work. On opening day, the team of dealers sold three manically patterned works in red, blue, and yellow from 1961 for approximately €350,000 apiece ($402,000), as well as a room-scaled neon installation from 1963 to a major though unnamed European art foundation for approximately €1 million ($1.15 million). That figure easily eclipsed the artist’s auction record, set back at Sotheby’s Amsterdam in March 2010, when 2 Trames, de Tirets O’ 90’ (1972) sold for €432,750.

The action resumes on Thursday at both venues, and continues through Sunday.