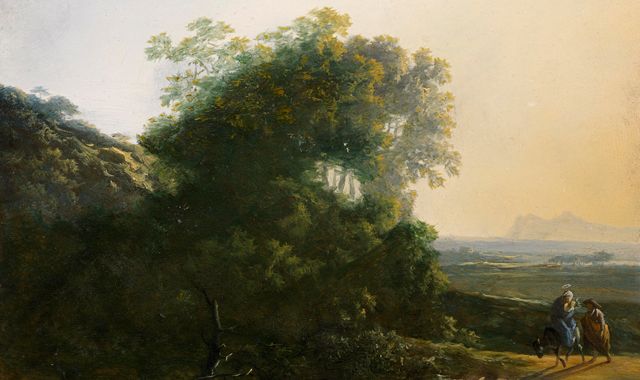 Adam Pijnacker’s “The Flight Into Egypt.”

MAASTRICHT, The Netherlands — A number of Old Master paintings, the anchor of The European Fine Art Fair (TEFAF), sold on Friday, a day after the opening social flurry of V.I.P. clients imbibing champagne and oysters.

At London’s Johnny van Haeften, the gallery sold a pair of tiny oil on copper works by Pieter Neefs, “A Cathedral Interior with a Mass” and “A Cathedral Interior with a Candle Lit Procession,” in the region of the €55,000 asking price. The gallery also sold Richard Brakenburgh’s mildly racy “A Young Woman Surprised by a Suitor in Her Bed Chamber,” a 20 5/8- by 16 1/8-inch oil, signed and dated 1691, in the vicinity of the €70,000 asking price.

At London/Munich’s Bernheimer-Colnaghi, a striking Paulin-Jean Baptiste Guerin’s “Self-Portrait” from the 1820s sold to a private European client somewhere in the range of the €310,000 asking price. The dark haired artist, outfitted in a white, wide-collared shirt and snappy cravat, looked confident and fresh at 200 years old.

At Paris-based Haboldt and Company, a charming and petite Adriaen Pietersz van de Venne from the 17th century, “A Beggar Couple Lying Idle,” in oil on panel sold near the €24,000 asking price. Haboldt also sold Adam Pijnacker’s “The Flight into Egypt,” a sublime oil on copper landscape measuring 17- by 21.2-cm and set in a jet black Dutch frame, for just under €200,000.

A more ambitiously priced and museum quality still life by Pieter Claesz, “A breakfast still life with a roemer, a brazier, a clay pipe with plates of herring and bread and a deck of cards,” from 1638 and exhibited here for the first time in a century, was still available at €2.7 million.

Certainly, the beggar couple would enjoy that repast.

In the area of decorative arts, Amsterdam’s Aronson Antiquairs, the Delftware specialists, sold a stunning and elaborate blue and white six tier Pyramidal Flower Vase Delf from 1690, measuring 38 7/16-inches high, to the National Gallery of Victoria Melbourne Australia for a six figure price as well as a lustrous and monochromatic circa 1780 black Delft Tea Caddy to a private collector for an otherwise undisclosed five figure price.

At London’s Stephen Ongpin Fine Art, located in the less traveled TEFAF Paper section of the fair, the dealer sold a superb Guercino (Giovanni Francesco Barbieri) work on paper in pen and brown ink, “Roman charity: Cimon and Pero,” from 1639 and made as a study for a painting that’s long lost, for $100,000 to a European collector. Ongpin also sold Jean-Francois Millet’s “A peasant at work in a field,” from circa 1849, for $250,000 to an American collector.

A famous impression by Pieter Claesz, “Melancholia I,” a print from 1514, sold for approximately €75,000 at the brilliant print stand manned by Frankfurt’s Helmet H. Rumbler.

A sun-splashed Venetian scene painting crowded with promenading figures, “Venice: The Molo, Looking East,” by Luca Carlevarlijs and generously scaled at 27 3/8- by 41-inches, sold at London’s Charles Beddington Gallery in the region of £500,000.

“There aren’t so many new things here but it looks really good,” said London-based dealer Anthony Crichton-Stuart, after viewing a rare and recently cleaned masterpiece by the 17th-century Venetian painter Bernardo Strozzi, “The Supper at Emmaus,” at New York’s Otto Naumann and priced at $3.5 million.

“Strozzi is all about brushstrokes,” said Naumann, who paid around $1.5 million for it at Christie’s New York four months ago, just as the painting was about to buy-in (fail to sell). “I never took such a big risk,” he added, noting how none of his usual competitors bid on the picture, which he described at the time as “black, black, black” and “I really didn’t know what I was buying.” Conservator Henry Gentle, hired by Naumann, fixed all that and brought the painting back to life.

Crichton-Stuart, who formerly exhibited at TEFAF under the London flag of the now shuttered Noortman Fine Paintings, had some news of his own, having freshly acquired the once grand dealership Agnews, formed in the 19th century, with financial backing from Clifford Schorer, a Boston-based hedge fund mogul and professor at the Columbia Business School, who happens to collect Old Master paintings.

You hear a lot of things roaming the aisles at TEFAF, apart from prices.

For instance, last year’s big buzz here that TEFAF was going to partner with Sotheby’s to open a Beijing branch of the fabled fair has crumbled after months of negotiations, according to Jonathan Green of London’s Richard Green and a trustee of TEFAF, a dealer-run fair.

As Green said, “We want to concentrate on the mother ship.”

The big rumor this year that TEFAF was going to bow to pressure from some exhibitors and shorten its 12-day run is also dead in water, according to Green, noting there’s no discussion by the board about it. “The two weekends we have here are great,” he said, referring to the fair’s long timeline.

The competition, at least for contemporary exhibitors, will heat up here next year when the fast-growing Art Basel Hong Kong changes its fair dates from mid-May to the same opening week as TEFAF.

A larger and later Chagall, “Le Soire sur le Seine,” from 1979, measuring 32- by 25.5-inches and featuring a number of familiar Chagall-esque elements, including a woman flying on the backside of a cock as well as a reclining artist couple in the foreground, the man holding his palette, sold at London’s Waterhouse and Dodd for $1.5 million.

“We had a very good day yesterday,” said Ray Waterhouse, “selling the Chagall oil to a new client from Belgium and we’ve been paid already.”

Finally, at least for some of the transactions made on Friday, New York’s Van de Weghe Fine Art sold Gerhard Richter’s richly colored “Abstraktes Bild” from 1986 and scaled at a reasonable 120- by 80-cms for $3 million.

“I sold it to a new European buyer who I never met before,” said Christophe van de Weghe. “He just walked into the stand and bought it. It’s unbelievable.”