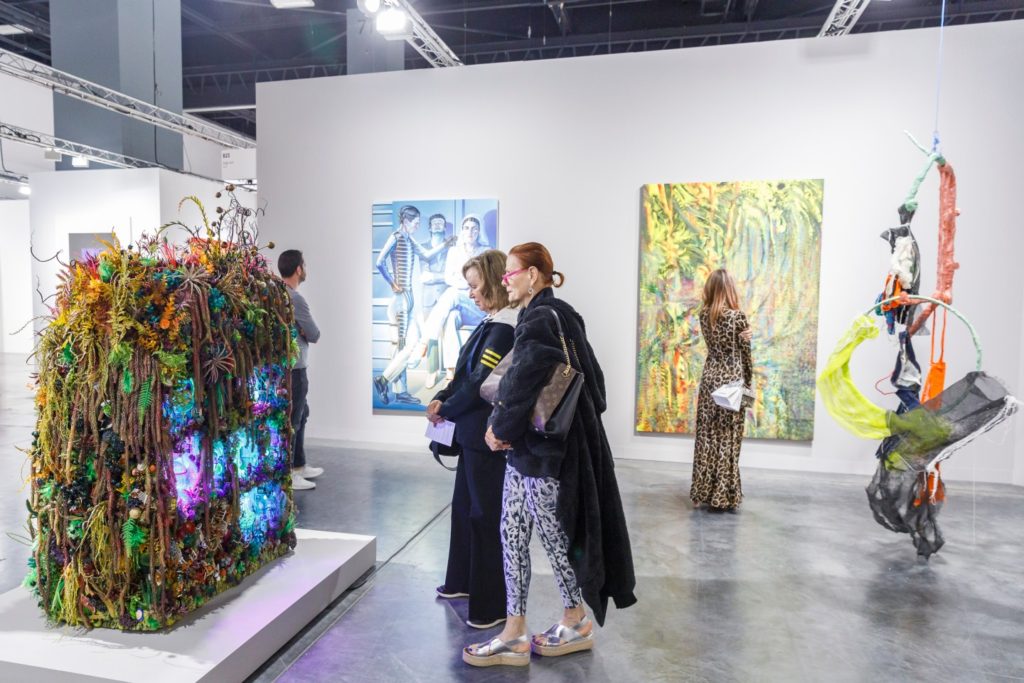 Following the VIP crush of Art Basel Miami Beach’s opening salvo on Wednesday, sales continued at a clip later in the week, further indicating that the North American art market is fit and largely unaffected by churning global headlines.

That was readily evident at Galerie Nordenhake, of Berlin, Stockholm, and Mexico City, where a large, luscious geometric abstraction by Stanley Whitney, Open Conversation (2019) sold in the $300,000-to-$400,000 range.

Painterly abstraction was also in high gear at Los Angeles’s Marc Selwyn Fine Art, with octogenarian Frank Bowling’s mixed-media canvas Turmoil (2019) selling in the region of its $325,000 asking price. “There’s been a lot of attention on him,” said Marc Selwyn, “in the wake of the Tate Britain retrospective,” which closed in late August.

In Selwyn’s power-packed presentation of Lee Bontecou works, an untitled soot drawing from 1958 that resembles an orifice or portal sold in the region of $475,000. Making the work, the artist used a blowtorch with its oxygen turned off to extract soot residue. Another version is cloistered at the Los Angeles County Museum of Art.

Speaking of abstraction, an early and dynamic 1915 Francis Picabia composition, Intervention d’une femme au moyen d’une machine (Intervention of a woman by means of a machine), in pencil, watercolor, and gouache on paper mounted on cardboard, measuring about 30 by 20 inches, sold at New York’s Francis M. Naumann Fine Art in the vicinity of its $850,000 asking price.

Commerce was also hopping at New York and Taipei’s Sean Kelly Gallery, with Dawoud Bey’s striking 40-by-30-inch black-and-white photograph A Girl with a Knife Nose Pin, New York (1990) selling to an unnamed museum for $20,000. (It is from an edition of four with two artist’s proofs.) 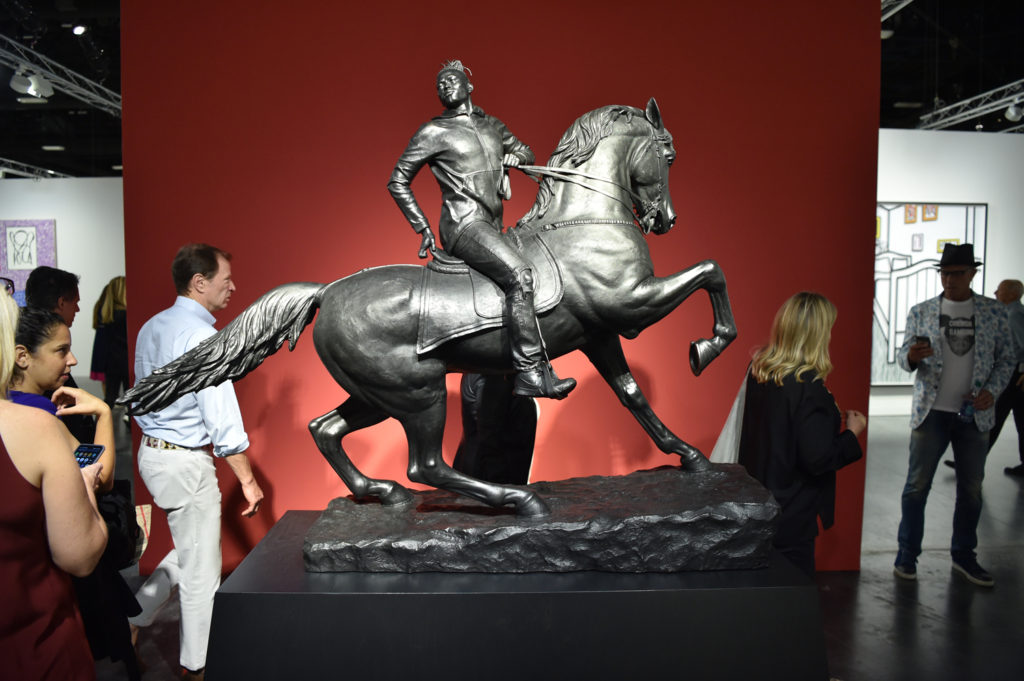 Kehinde Wiley’s crowd-drawing bronze sculpture of a horse and rider, Rumors of War, was selling for $600,000. It is an edition of nine with three proofs.

“We sold a number of them,” Sean Kelly said, without showing more of his hand.

Asked if he sensed any differences between this year’s fair—the 18th—and previous editions, the seasoned dealer said, “We always do well here, so that’s normal, but there is a slight changing of the guard from old-school, mostly New York–based collectors to younger collectors from different parts of the world. It may be one of those generational moments.”

Sculpture was also out in force at Antwerp’s Zeno X Gallery, where a stunning Mark Manders head made of painted bronze, wood, and plastic, Composition with Yellow (2017–18), which was cast in an edition of three, sold for $170,000. 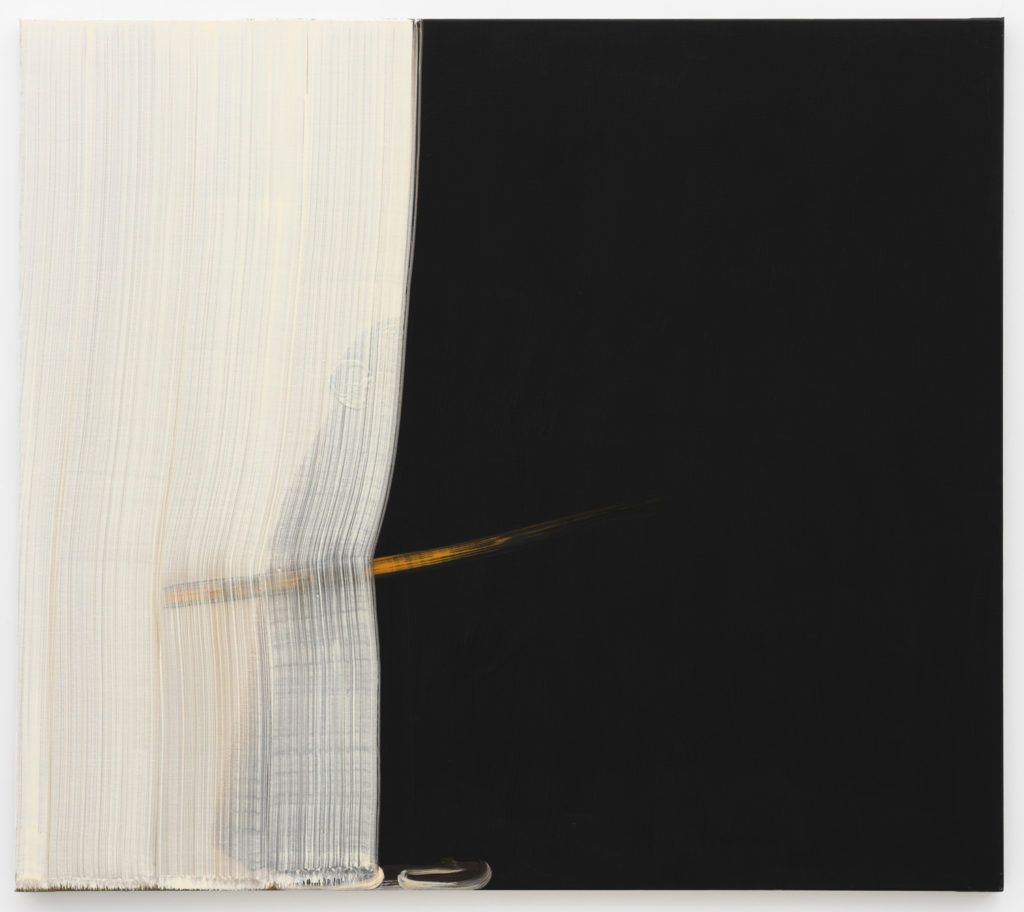 Zeno X also sold an impressive, atmospheric figurative painting by the Korean artist Hyun-Sook Song, Brushstrokes-Diagram (2018), in tempera on canvas, for $30,000. It also sold delicate abstractions by N. Dash, executed in linen, paper, adobe and jute, for prices in the mid-five figures.

On familiar ground but introducing a new medium, several editions of a 2019 untitled Cindy Sherman tapestry—cotton, wool, yearn, acrylic, mercurise, and Lurex freshly woven together at a workshop in Flanders and scaled at about 9½ feet by 7½ feet—sold at $150,000 apiece from an edition of 10. The artist resembles a Pre-Raphaelite beauty in the piece, with a gauzy veil of flowers floating across her face.

London, Milan, and Hong Kong dealer Massimo De Carlo also registered a bounty of sales across various mediums, including two psychologically charged Kaari Upson heads in mixed media that sold for $45,000 each. The pieces meld the artist’s features with those of her grandmother in a high-and-low-tech brew. Upson was featured in the most recent Venice Biennale, which just closed.

De Carlo also sold a new 84-inch-square untitled composition by Chicago painter McArthur Binion that is part of a cycle from his “White Series” for $250,000 and, in a zanier mod, Rob Pruitt’s Panda Love Story (2019), in acrylic on canvas and enamel and glitter on linen, in an artist-made frame for $130,000. 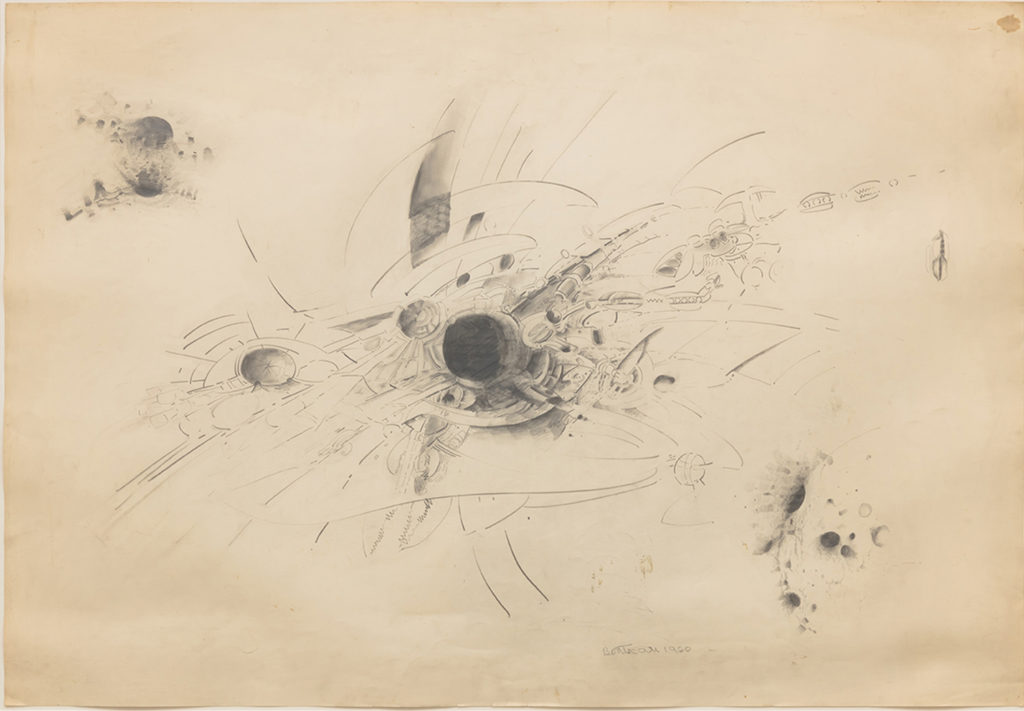 In that same transactional mix, the gallery sold Jamian Juliano-Villani’s Internet-sourced-and-diced figurative work, Upon Recommendation of the Faculty (2019), which measures 6 feet by 5, for $80,000, as well as an untitled Aaron Garber-Maikovska, an oil stick on plastic board, for $20,000. The latter artist is currently featured in his first solo outing at De Carlo’s London space (and just joined Blum & Poe’s roster).

The run of sales continued at Los Angeles’s Kordansky Gallery, where a painting by Jonas Wood, the wall-spanning Yellow Orchid with Baby Snake (it’s 110 by 82 inches) sold for $750,000.

Brand new to the gallery, the artist Huma Bhabba had a new untitled mixed-media work on a color photo, measuring 80 by 50 inches, go quickly for $50,000. 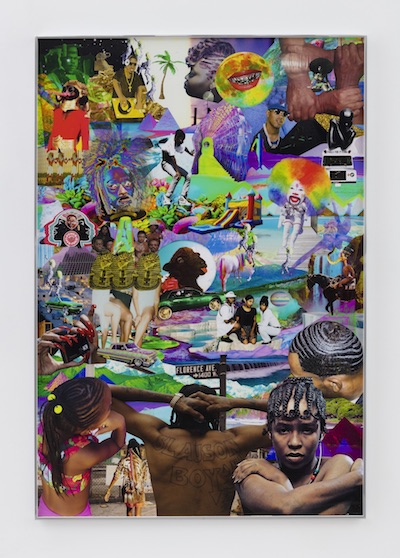 Fresh from recent exhibitions at the Hammer Museum’s “Made in L.A.” biennial and the Museum of Contemporary Art in the city, Lauren Halsey had her digital collage, ma foreva thang (2019), an inkjet print on paper in an edition of six, sell for $20,000. (Those seeking her work at a lower price point can look out for her new Nike shoes.)

In dire need of fresh air and a change of scene from the marketplace battleground of the Miami Beach Convention Center, a ride across the Causeway to the brand new Rubell Museum brought immediate relief.

A familiar figure greeted me, the Pulitzer Prize–winning art critic and Instagram maven Jerry Saltz. When I innocently asked what he thought of Art Basel, he fairly shouted, “I was in Miami yesterday, and I wasn’t invited to the fair, and didn’t even know about it. I’m going to burn my card when I get hold of it and you can write that!”

Sounds like there was some sort of misunderstanding. After publishing just that, a rep for Basel disputed Saltz’s account, writing, “As soon as our team was aware that Jerry was planning to be in Miami this week, we arranged a VIP card for him and shared the fair’s opening hours and VIP Card pick-up information, so it’s incorrect that he wasn’t invited to the fair this year.”