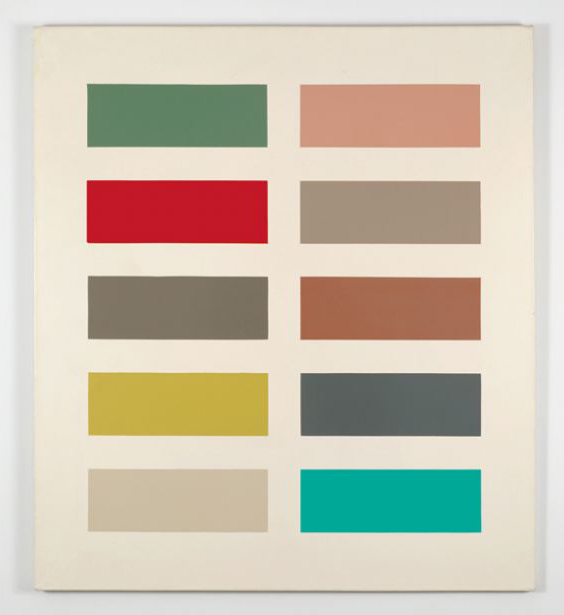 BASEL, Switzerland — In what appears to be one of the strongest market results in its 46-year history, sales continued to pile up on day two at Art Basel.

In the heavyweight column New York/London David Zwirner Gallery takes the prize as the stand’s exquisite Agnes Martin painting, “Mountain II” from 1966, sold to a European collector for $9.5 million. The 72 by 72 inch square canvas, barely visible from afar and rendered in acrylic and graphite, with precise horizontal bands of paint, is the sister painting to “Mountain I” in the Museum of Modern Art’s permanent collection. The painting can’t be properly photographed due to its faint impression.

Zwirner also sold Donald Judd’s “Untitled” stack in copper and blue Plexiglas sheets, from 1987, for an undisclosed price, but characterized by Julia Joern, the gallery’s press maven, as “one of the most expensive works on the stand.” Pressed to give a region of the asking price, Joern responded, “Even when people speculate it backfires on you.” She added: “We have to respect the consignor’s wishes or we don’t get the inventory.”

For comparison sake, the auction record for a Judd 10-unit stack was set at Christie’s New York in November 2012 when “Untitled (Bernstein 89-24),” from 1989, sold to Alice Walton of Crystal Bridges fame for $10.1 million. That said, the Christie’s stack was fabricated in the larger, nine-inch high, evenly spaced configuration versus the six-inch height of the units that sold here.

Continuing the multi-million dollar trend, New York’s Dominique Levy Gallery sold its Gerhard Richter, “Zehn Farben” (or color chart painting) from 1966 in enamel on canvas and scaled at 53 ¼ by 47 ¼ inches, which carried a $5 million asking price. It ranks as Richter’s first abstract work and the first in his storied color chart series of 18 paintings that were executed in various yet standard paint store colors. This pristine example, comprising 10 differently colored rectangles in two vertical rows and set against a white background, was one of the standout examples seen by this writer at the fair.

The gallery also sold for an undisclosed (though obviously seven-figure) price a Frank Stella geometric composition, “Black Study I” from 1968, in collage, drawing, paint, and printing on paper measuring 19 5/8 by 39 5/8 inches.

One can’t help noticing that the classic Modern works, as in pre-World War II vintage offerings, are in ever diminishing numbers here. It’s ironic given the historical set up of the first floor hall, which is traditionally devoted to the Modern while the upstairs, equally-sized section is pegged for the Contemporary and more primary market works. This year, Art Basel shifted a number of galleries situated on the downstairs turf to create a more distinct impression of Modern versus Contemporary fare. The fair defines Modern in a broader context, spanning the years 1900 to 1970, a rather puzzling demarcation line.

In any case, London’s Richard Nagy Gallery, moved to a more prime spot adjacent to the Fondation Beyeler stand (which was dominated this time around by a large-scale Jean-Michel Basquiat painting and a trio of imposing Tribal Art works), presented its textured mix of both German and Austrian art as well as some other surprises, including a stunning Rene Magritte portrait, circa 1936, of Renee Cordier, priced in the region of $3.3 million and a sketchy and early Francis Bacon study of a dog. So far, the gallery sold an Egon Schiele pencil drawing, a study of a reclining nude girl, in the $250-300,000 range.

Though not exactly “Modern,” Marcel Duchamp’s small but substantial “Autoportrait de profil” from 1963, comprised of papier dechire orange et colle sur papier, sold for €120,000 at Paris-based Galerie 1900-2000. The gallery also staged a mini-solo presentation of American Minimalist Sol Lewitt, with “39 Incomplete Open Cubes Drawings” from 1973, never before exhibited or seen at auction. Each of the 28 by 21.5 centimeter rendered drawings are signed “Sol” and numbered. The works were being offered at €10,000 apiece and so far, some 21 of the 39 displayed have sold. The drawings were made as part of a sculpture commission in Europe and were only rediscovered in a folder by the original owner in 1990.

“It’s good to show works at galleries sometimes that have not been seen at auction,” said Marcel Fleiss, the founder and owner of Galerie 1900-2000.

More Modern works, if going by the 1970 boundary, were bought up, as evidenced at New York’s Mitchell-Innes & Nash, where a multi-punctured Lucio Fontana work, “Concetto Spaziale” from 1955 and measuring 27 by 35 inches, sold in the region of the $400,000 asking price, as did American Pop artist Allan D’Arcangelo’s “Marilyn” from 1962, measuring 60 by 54 inches and executed in acrylic on canvas with string and scissors, which sold for $500,000. The screen siren’s face is almost blank with cut-out styled elements running alongside her face as one would find in a child’s cut-out book, hence the convenient inclusion of the suspended scissors. The gallery also sold two small-scale Roy Lichtenstein drawings, from 1972 and 1997, which went for $100,000 and $150,000 respectively

On the distinctly contemporary front, Mitchell-Innes & Nash also sold a major and brand new William Pope.L, “Finnish Painting” from 2015, rendered in color-charged oil, acrylic, flashpaint, marker, Bic pen, collage, red thumbtacks, and blue tape on torn paper that went to an otherwise unidentified American museum for $50,000. The large-lettered text painting, which challenges even 20-20 vision, is playfully signed RRYMAN at the lower right hand corner. The Chicago-born artist is currently the subject of a survey show at the Museum of Contemporary Art in Los Angeles.

The gallery also sold a somewhat X-rated diptych by Leigh Ledare, “Dominic and Emilio (Child’s Drawings)” from 2015 in oil stick and ink on C-print, for $28,000. The artist photographed his mother, lying nude with her legs spread on a four-poster bed, and had the twin boys armed with crayons scribble on the two-large scale C-prints, each measuring 50 by 40 inches. According to the gallery, the pose and lack of outfit were chosen by the artist’s mother, a former dancer.

In one of the fair’s standout presentations, New York’s Salon 94 staged “David Hammons-Dung,” rare works by the New York-based artist. “We came here,” said gallery director Jessica Witkin, “to show really historical work by David Hammons that people haven’t seen before.” Prices ranged from $300,000 and above, and “some works have sold,” noted Witkin.

The title refers to a group of sculptures Hammons created in 1983-85 with elephant dung sourced from the Bronx Zoo. The works, measuring 7.5 by 5.5 by 5.5 inches, are painted in bright colors with cheery tribal patterns and also contain a mixed-media mélange of peanuts, beads, metal pins, and plastic figurines. One of the dung sculptures is shackled by a thick, found chain, relating, it would seem, to the fate of incarcerated elephants in American zoos and laboring in various circuses. One can instantly see Hammons’s influence on the work of the onetime YBA artist Chris Ofili, and speculate on any number of other cultural and political references.

Another of the Hammons works, “Flight Fantasy” from 1980 and comprised in part of Harlem barber shop hair cuttings and shards of vinyl records — originally part of a now lost art installation at the Atlanta International Airport — conveys in part Hammons’s powerful and still evolving oeuvre.