Skip to contentSkip to content
Blouin Artinfo
Art Basel’s VIP Opening Kicks Things Off With a Flurry of Sales
June 17, 2015 by Judd Tully 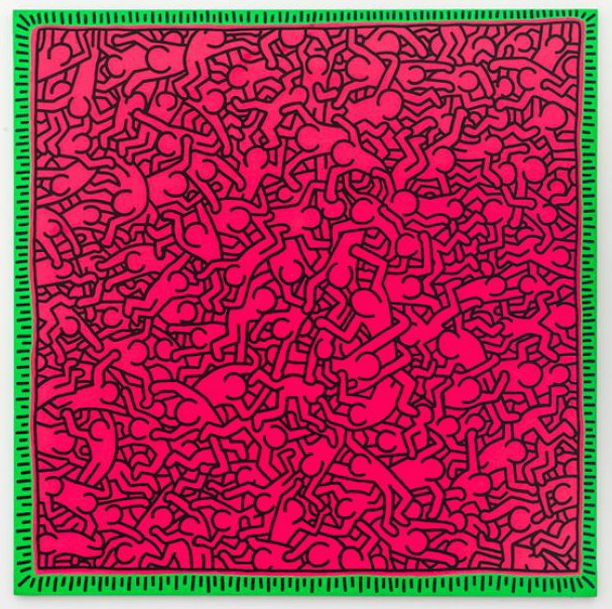 BASEL, Switzerland — Following in the heady wake from the huge May auction results in New York, frustrated art buyers were out in force during the first few hours of the VIP opening celebrating the 46th iteration of Europe’s grandly exclusive Art Basel fair.

“We’ve broken our duck,” said James Holland-Hibbert of London’s Hazlitt Holland-Hibbert, using an English phrase to describe the stand’s first sale, Howard Hodgkin’s masterly semi-abstraction “In the Black Kitchen,” in oil on wood from 1984-90, which sold to an Asian collector in the region of the £450,000 asking price. “It’s a genuine new client from the fair,” added Holland-Hibbert, “and it wasn’t pre-sold, so it’s a nice start.”

Sales were popping at every turn, as evidenced at New York/London Skarstedt Gallery with Keith Haring’s bubble gum pink-colored and figure-packed “Untitled (June, 1984),” the artist’s first work on canvas (as opposed to vinyl tarps), which sold to an American collector in the $5.5 million range. The 94-inch square painting in acrylic and fluorescent acrylic paint “is as good as it gets,” summed up gallerist Per Skarstedt. The gallery also sold Albert Oehlen’s “Untitled” painting in oil on printed fabric from 1992, measuring 78 ¾ by 78 ¾ inches, for around $1 million. (Oehlen is the subject of a just opened survey show at the New Museum in New York, no doubt fanning market interest.) In addition, Skarstedt sold a newly minted George Condo painting, “The Good Old Days” from 2015, in oil and pigment stick on linen, taking up a palette knife and further drilling into his obsession with Pablo Picasso, this one going to another American collector in the $600,000 range.

“The auctions were very strong,” observed Skarstedt, “and a lot of people didn’t get anything and are coming here to buy some paintings.”
Museum related shows likewise raised the market temperature for Marlene Dumas, currently the subject of a Fondation Beyeler exhibition here in Basel, as the aptly titled close-up portrait “Tired Woman,” from 1991, sold for over a million euros at New York/London Dominique Levy Gallery.

Two other Dumas figurative paintings at New York/London David Zwirner Gallery, the artist’s primary market dealer, also sold, as “Horns and Tails,” from 1999-2000, went for an undisclosed price at the request of the consignor and the large-scale “Helena,” from 2002, depicting the artist’s daughter, sold for $3.5 million.

The gallery additionally sold a large-scale Michael Borremans’s painting, “Black Mould II” from 2014, for just under $1 million — Borremans is currently enjoying a survey show at the Dallas Museum of Art. Zwirner also sold Sigmar Polke’s ghostly composition “Skelett” from 1974, featuring a rather fantastic skeleton image executed on two types of industrially-produced domestic fabrics, for $3.5 million. A large-scale (after all, size matters) Oscar Murillo abstraction, “2+” from 2014, comprised of oil and oil stick on canvas and linen, also sold for $250,000, as did Bridget Riley’s jaunty and geometric “Allegro Red” from 2014, which went for approximately £750,000. (All the major world currencies are honored here and there’s even a UBS ATM machine stationed in the fair’s entryway in case anyone is short of cash.)

There were other clusters of multi-million dollar sales, as was the case at New York’s van de Weghe Gallery, where Christopher Wool’s big and brushy abstraction, boasting a medley of gray and white passages, “Untitled (P577)” from 2009 and measuring 96 by 72 inches, sold in the region of the $5.5 million asking price.

“We’re a little bit confused,” said director Adam Sheffer, “as to why people are thinking Americans aren’t coming to Basel this year because of the Venice Biennale” that opened last month. “Basel,” continued Sheffer, “is the gold standard and people come here whether it’s convenient or not. People like to buy from galleries, they like the rituals and they like the relationships.”

Sheffer was taking a polite dig at the auction houses whose executives, specialists, and business getters were out in force during the vernissage, scooping up valuable market data, including Sotheby’s new CEO Tad Smith, who prowled the hall with a small retinue of troops.

Other notable sales that took place during the pre-lunchtime break, where famished buyers and tire kickers headed for the outdoor paddock for the fair’s famous grilled sausages, included Thomas Schutte’s small-scale bronze “Vater Staat, dressed” from 2010, outfitted in an artist-made black checked miniature robe and braided sash on a steel base, which went for approximately $1.6 million. It last sold at Christie’s New York in November 2014 for $1,205,000.

“There’s a lot of auction stuff at the fair,” said New York dealer Alberto Mugrabi, buttonholed outside during the lunch break, “and honestly, people don’t care. All they just want is the piece and all that other stuff is irrelevant now.”

Mugrabi’s father, Jose, the patriarch of the art dealing family, was seated nearby in the crowded paddock area (no horses in sight) and said he hadn’t bought a thing at the fair but went to his smart phone and pulled up an image of an Alexander Calder hanging mobile from the 1930s that he had just bought from Hauser & Wirth Gallery in Zurich, where Calder is the subject of a solo show; he noted that the asking price was $5.5 million.

“I also bought the one at Christie’s in May for $3.9 million,” said Mugrabi.

Art Basel isn’t all about seven-figure or more sales, though Helly Nahmad Gallery had a $16 million Picasso from the “Femme d’Algers (Version C)” series, dated 1954, on offer, as well as a $50 million Mark Rothko, “Untitled (Yellow, Orange, Yellow, Light Orange)” from 1955, which had sold at Sotheby’s New York last November from the collection of Mrs. Paul “Bunny” Mellon for $36.5 million. They were both being admired but had as yet sold.

Upstairs in Hall 2, where the primary market dealers are concentrated, the action continued at New York’s 303 Gallery at seemingly more digestible price points. Ex-punk rocker Kim Gordon of Sonic Youth fame had two paintings on view, “Pussy Galore” from 2009, measuring 60 by 40 inches and spelling out the title in drippy black letters, which sold for $30,000, as well as a crushed self-portrait of sorts, “The Sonic Youth” from 2015, which sat crumpled on the floor as a testament to the broken up band and sold in the $30,000 range. The artist is currently featured in an exhibition at the DESTE Foundation in Athens.

The gallery also sold Doug Aitken’s mirror sculpture “BAD,” in high density foam, wood, mirror, and painted glass, in the $250,000 range to a museum collection in the Middle East, as well as several small-scale paintings by Karen Kilimnik in the $150,000 range, including “The Adirondack Cabin Deer” from 2008, measuring 14 by 18 inches in water soluble oil color on canvas, which sold to an Italian foundation. Gallerist Lisa Spellman said the Kalimnik paintings represented the artist’s “10-year overview of her obsession with the Alps.”

The fair continues through Sunday.