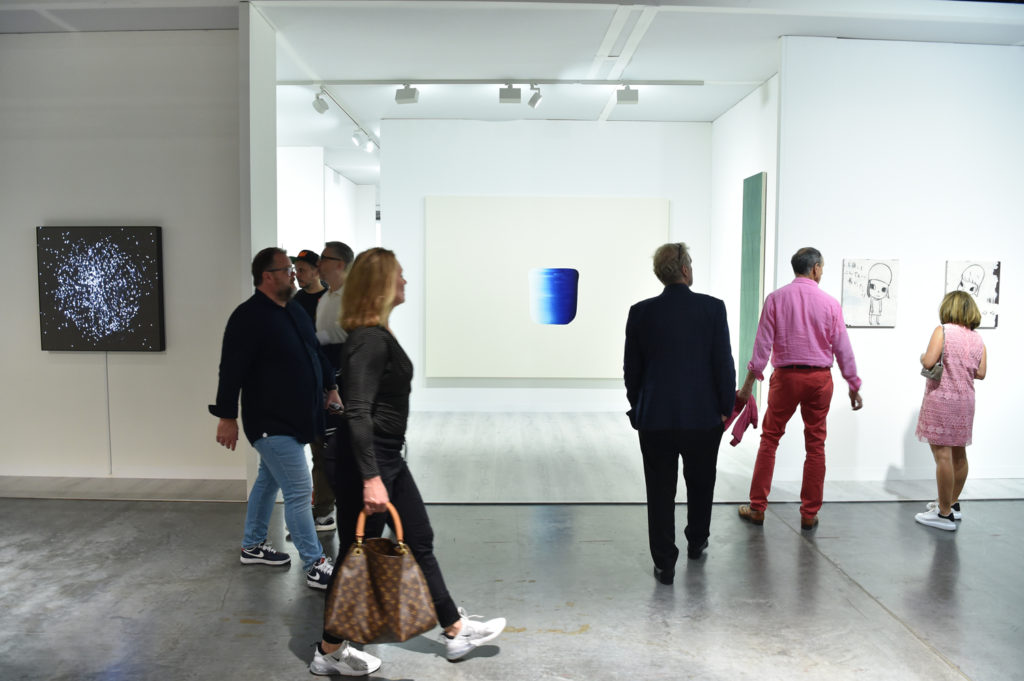 It’s no secret that the global art market is alive and relatively well, especially in the air-conditioned bubble of the spacious Miami Beach Convention Center, where the V.I.P. vernissage of the 18th Art Basel Miami Beach fair took place Wednesday. As beautiful weather graced the city outside, 269 galleries offered primary and secondary market material.

Early on, sales were brisk and even heaving at Blum & Poe, of Los Angeles, New York, and Tokyo, with two fresh-to-market paintings by Angeleno Henry Taylor finding buyers. Untitled (2019) features a muscular man in a watch cap, and Selfies (2019) shows a young woman photographing herself in front of a bathroom mirror. They went for $200,000 and $225,000, respectively.

But that was just for starters. The gallery also sold all five works in various media by Yoshimoto Nara that it was showing, including a roughly 26-by-21-inch 2018 painting of a young girl playing guitar under a bold text—“Rock You!”—for $250,000. It also parted with Mark Grotjahn’s heavily layered 2019 abstraction Untitled (Capri 51.75), in oil on cardboard, for $750,000, and a high-gloss untitled Julian Schnabel for $350,000.

Poe and his team will rehang the booth on Thursday with a solo presentation of landscape paintings by March Avery, the octogenarian daughter of revered American painter Milton Avery. 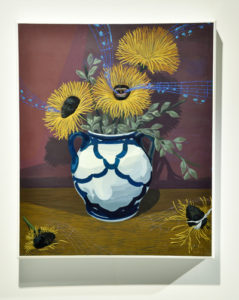 At New York’s Canada Gallery, large and light-filled abstract paintings by RJ Messineo anchored the booth, with Building & Sky (2019), in oil and wood on panel, selling for $30,000. It was her major art-fair appearance, with single works by other gallery artists positioned around her.

“I wanted to make her the hearth of the booth,” said Canada cofounder Phil Grauer, “with everybody else around it.” That included Katherine Bradford’s richly colored figurative work Queen Mary, measuring 80 by 68 inches, which went for $50,000, and Matt Connors’s abstract Pieta III (2019), which sold for $50,000.

“It’s all pretty much sold out, with a few things on hold,” Grauer said, echoing Poe’s observation. “For the most part, it’s been busy and selling.”

Another young artist making waves was Derek Fordjour, in his first showing with New York’s Petzel Gallery; his Peleton 1 (2019), an acrylic, charcoal, and oil paint on newspaper piece depicting five rows of cyclists chasing one another, sold in the opening moments for $80,000. Fordjour also drew an impatient waiting list of wannabe buyers at Josh Lilley’s both at Frieze London in October.

Price points climbed higher at New York’s Jack Shainman gallery, which sold a stunning new painting by Kerry James Marshall titled Deadheads (2019). It’s a van Gogh-like still life in acrylic on PVC panel with flower heads that depict the open mouths of jazz or blues singers belting out lyrics that spin across the canvas in electric-blue notes. The asking price was $2.8 million.

Shainman also sold a mural-scaled painting by Philadelphia artist Becky Suss, Houseboat on Dull Lake in the Valley, a kind of homage to Matisse in Nice, for $55,000. “We have a waiting list,” the dealer said.

In addition, Shainman found a buyer for a towering Nick Cave Sound Suit (2012)—a tightly woven, mixed-media mélange of sock monkeys, sweaters, pipe cleaners, metal, and (of course), a mannequin—for $175,000. 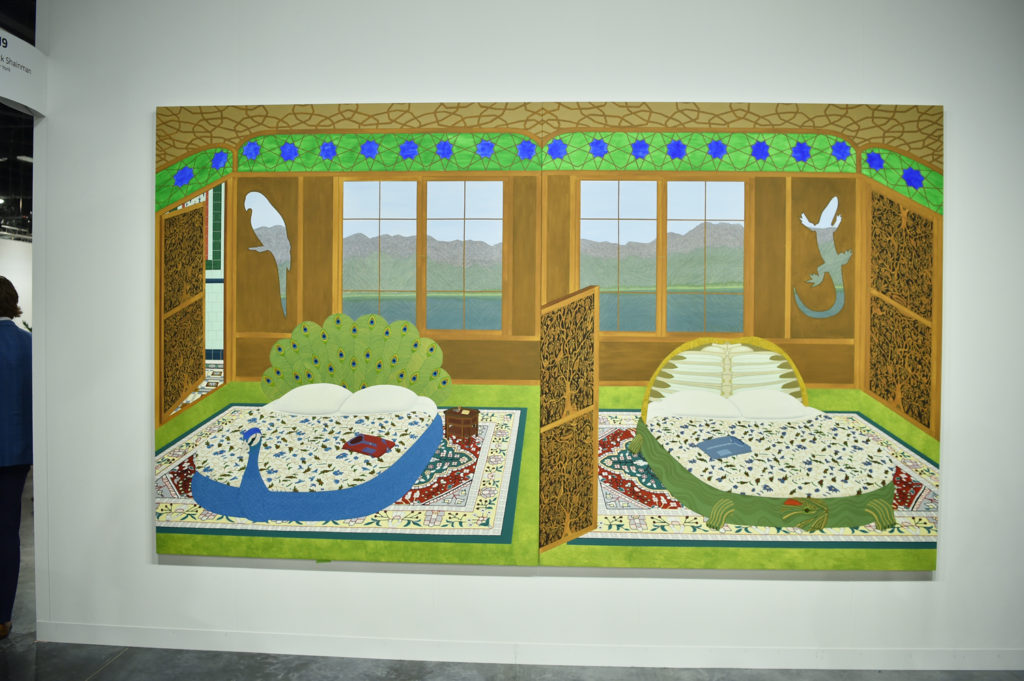 Becky Suss’s Houseboat on Dull Lake in the Valley of K (2019), which sold at Jack Shainman Gallery’s booth.
STEPHEN LOVEKIN/SHUTTERSTOCK

The New York dealer’s sales sheet went on, with multiple sales of a Gordon Parks photograph, Untitled, Shady Grove, Alabama (1956), featuring an African-American dad with his three kids at a Dairy Queen-like, soft-ice-cream roadside shop under a chilling sign reading “Colored.” The archival pigment prints went for $55,000 each.

At first glance, the oval-shaped canvas in a gold-tinted frame on Shainman’s stand looked like a Corot, but it was a Barkley L. Hendricks plein air landscape painting of Jamaica that sold for $60,000 in the first 5 minutes of the fair.

“Barkley thought his landscapes were his best paintings,” said Shainman, who recently published a standalone volume on the subject. The gallery’s copies had already disappeared off the stand. Call it Miami Vice. “It’s so crazy in Miami when the art world descends here,” said Shainman, who usually evokes a cool and calm manner, “and while it’s great, it’s a difficult balancing act.”

Strolling along the Appian Way that is Miami Basel, leading local fixture and philanthropist Marty Margulies, the creator of the Margulies Collection at the Warehouse, stopped by say hello and off-handedly mentioned that he had just acquired, from Berlin’s Konrad Fischer gallery, the Belgian sculptor Peter Buggenout’s Mont Ventonx #34 (2016), a color-charged mixed-media abstraction that includes, among other things, a tanned cow stomach, but one would be hard-pressed to identify that in the mix. “They were asking over $60,000,” Margulies said. “It’s a beautiful piece.”

Though he was just getting started, New York and London dealer Per Skarstedt was taking a quick break outside his stand on a bench, noting a few early sales. 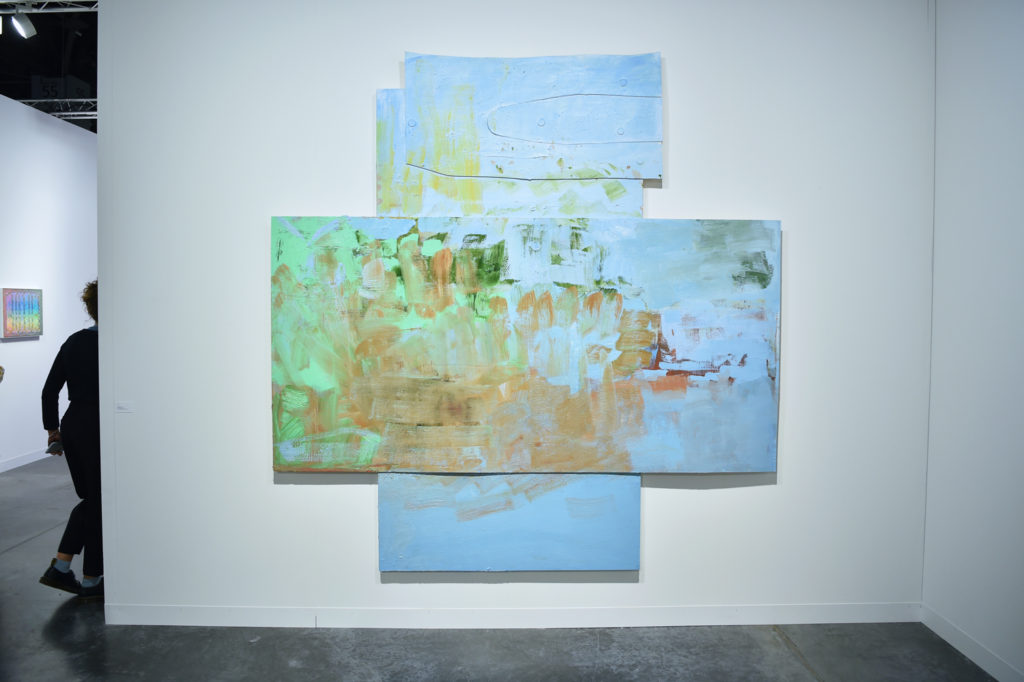 A new painting by Eric Fischl, On the Beach, depicting two figures—a woman in a red-and-white-striped bikini and a man, seemingly nude—looking out in different directions, sold for $850,000, as did a rollicking George Condo Cubist-styled head, A Commercial Approach to Abstract Painting (2006), scaled at 60 by 52 inches, which went “for around $2 million.”

Speaking of Fischl, Skarstedt said, “He’s not doing a lot of work right now, and it’s great to have a new painting here in Miami since his market has been more in Europe.” 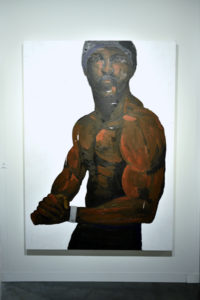 The dealer also had pricier kit on view, including a late and probably great Willem de Kooning, Untitled VII (1986), which carried an $8 million price tag. “A good level here,” Skarstedt said, “is between $300,000 to $2 million. Over that, it’s a little harder.”

Searching for the exit sign and Miami sunshine, and passing by the hoodie-draped visage of Leonardo DiCaprio chilling at Helly Nahmad’s stand, this viewer stopped dead in his tracks at the Beyeler Fondation’s miniature loan exhibition of Goya etchings from the artist’s masterful 1810–15 “The Disasters of War” series. (The Basel institution has a Goya retrospective on deck for next year.)

Loaned from Miami collector and Design District maven Craig Robins, the ghoulish works of tortured figures deflated the happy-go-lucky (and very rich) atmosphere of the fair, which runs through Sunday.