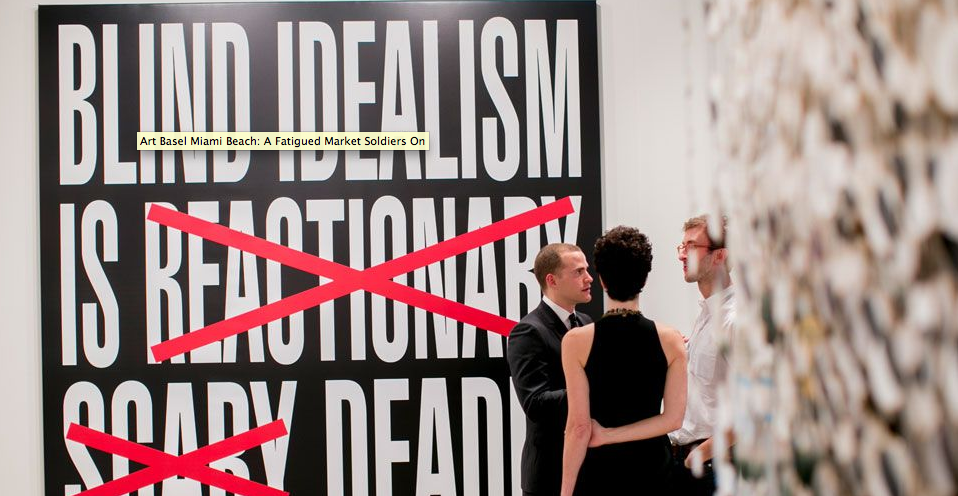 Despite what might be attributed to art market exhaustion after a stunning year of record breaking auction and art fair sales mixed with more recent headline grabbing news about sacked auction house CEOs, the 13th edition of Art Basel Miami Beach soldiered on with solid sales.

The action was brisk at Los Angeles’s Regen Projects as Glenn Ligon’s text dense “Come Out Study #15” from 2014, in silk screen on canvas, sold to an American collector for $200,000. Ligon is currently the subject of a major exhibition at London’s Camden Center and this work hails from that same series on view.

From another time and installed in cinematic-like style at Zurich’s Galerie Gmurzynska, which is celebrating its 50th anniversary, a rare and recently unearthed Pablo Picasso fresco from 1918, “Venus Et Amour,” formerly in the collection of Warhol business manager Frederick Hughes, sold for around $1 million to an American collection. Gmurzynska also sold two large-scale Robert Indiana paintings in oil on homasote from 1959, “Golden Orbs with Chevrons” and “Golden Circles,” at the identical asking price of $1.7 million.

Though it wasn’t officially for sale, the gallery hung a Kazimir Malevich masterpiece from 1917, “Dissolution of Form,” considered to be the most important Suprematist work after the “Black Square.” It is fresh from a blockbuster Malevich showing at Tate Modern. “Normally, you just don’t bring that sort of thing to an art fair,” said Mathias Rastorfer, a Gmurzynska partner. Think north of $60 million if the Malevich carried a price tag.

Of course, ABMB isn’t about Modern masterpieces, but dwells on more contemporary turf, which has grown more conservative as the fair enters its teenage years. Perhaps one exception, a notable one at that, was a stand-alone installation at Paris/Cologne Karsten Greve, with works by the 34-year-old Irish artist Claire Morgan. Though the stand had its share of multi-million dollar Louise Bourgeois and Cy Twombly works, Morgan’s stunning boxes were priced and sold in the $40,000 range, including “Be careful what your wish for” from 2014, consisting of a taxidermied Jackdaw set in a deadly nest of torn, colored polythene nylon and encased in a glass cabinet.

“We want to see culture as an important part of life,” said gallery founder Karsten Greve in a philosophical moment amidst the swirl of commercial action, “and give people an idea to think they might have a vision about something.” Greve should know since he showcased works by Twombly, similar to the one that sold last month at Christie’s for a record $70 million, for $9,000 decades ago. “People thought I was crazy.”

Speaking about the Basquiat painting, gallery founder Christophe van de Weghe said, “I never met him before. All the guys who bought from me yesterday [during the V.I.P. preview] were in their 30s and 40s. It’s a new world,” noted the dealer, “and they’re all new clients.”

Price points were at lower altitudes at New York’s Mary Boone Gallery as a wall hogging Barbara Kruger digital print on vinyl, “Untitled (Blind Idealism is Deadly)” from 2013, sold for around $250,000. The gallery also sold a compelling figure painting by Liu Xiaodong, “My Hometown” from 2014, depicting a group of young people traipsing along an ugly landscape, at an asking price of $125,000, and Will Cotton’s frothy “Elle with Cupcakes,” also from 2014 and measuring 36 by 24 inches, at an asking price of $85,000.

You never know what you might run into or admire at this fair, and several works stood out at New York’s Michael Rosenfeld Gallery. Iconic furniture maker Harry Bertoia’s delicate and other-worldly mobile, “Untitled (Cloud)” in bronze coated wire from circa 1955, sold in the low six figures and Alma Thomas’s color-charged “Lunar Rendezvous-Circle of Flowers” from 1960 sold to an otherwise unidentified institution in the high six figures, according to gallerist Michael Rosenfeld.

Along the Appian Way-like aisles of ABMB it’s hard not to run into familiar art world figures. That was the case as Montreal collector Francois Odermatt paused at a stand and whipped out his cracked-glass smart phone to show off a recent purchase. It was a Hannah Wilke drawing that he had just acquired from London’s Alison Jacques for $90,000. Previously unaware of Wilke’s work, Odermatt said he spotted Christie’s post-war specialist Brett Gorvy at Jacques, who told him that he owned four works by the artist and thought she was fantastic. The affirmation gave Odermatt confidence to pull the trigger. “Sometimes, you want to go on your own path,” said the collector.

Along those lines, a European collector at New York’s Paula Cooper Gallery bought Tauba Auerbach’s “Slice/Wave Fulgurite III” from 2014, a rather extraordinary object in African cichlid sand, sandbox sand, red jasper, glass frit, azurite, resin, glass, and a spray lacquered wooden plinth for $70,000. Another collector snagged Auerbach’s “Prism Scan I,” a set of 13 C-prints from an edition of three for $30,000. The gallery also sold one of Christian Marclay’s “Actions: Floppp Silurp Spaloosh Whoomph (No.5)” from 2013, a 62 by 103 inch screenprint and acrylic on canvas in the $400,000 range.

Anyone who travels to art fairs on a regular or addicted basis notices certain works that reappear. That was a case in point at New York’s Mnuchin Gallery, where a brawny and eye-catching John Chamberlain, “Miss Remember Ford” from 1964, sold for around $3 million. “We had it in Basel in June,” said gallerist Robert Mnuchin, “but we sold it here in two minutes. What does fresh mean,” queried the dealer in Socratic style, “only that the right person has to see it.”

Mnuchin also sold an early David Hammons abstract painting, “Untitled” from 1969 in enamel on Masonite, for around $300,000 to an American collector, and Mark Bradford’s stunning and large-scale collage “White Girl,” from 2002, for approximately $1.8 million. The gallery also sold Robert Ryman’s petite and heavenly white “Page,” from 1998, for $1.5 million. “We’re actually selling stuff,” exclaimed the dealer.

Another Hammons sold at New York/London Dominique Levy Gallery. That work, “Untitled” from 1989-90, consists of a Louis Vuitton handbag stretched with found black rubber, a shoeshine brush, and metal springs — it sold in the region of $1.5 million.

Nearby, Christopher Wool’s untitled enamel on rice paper work from 1994 sold somewhere in the vicinity of the $1.7 million asking price. “The first person who walked into the booth bought it,” said Kresler.