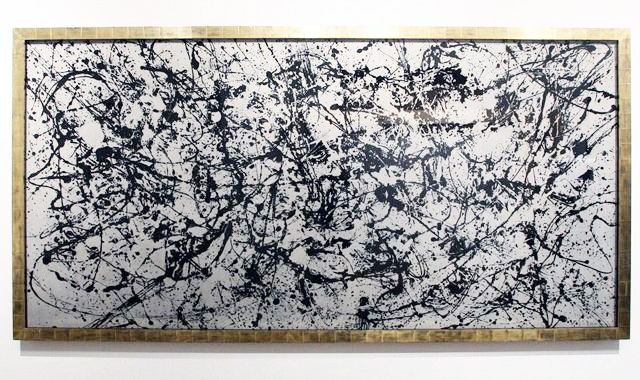 BASEL, Switzerland — The 45th edition of Art Basel, Europe’s premier modern and contemporary art fair, opened to an elite group of art world players with a big bang of serial sales, indicating the continuing strength of the global art market.

Robert Longo’s masterful faux Ab-Ex creation, “Untitled (Pollock Composite)” from 2014, in charcoal on mounted paper and measuring 59 7/8 by 120 inches, sold for $400,000 to an American collector. “It’s amazing what he can do with charcoal,” said gallery founding partner Janelle Reiring of New York’s Metro Pictures. “He made his own Pollock.” It was one of a number of so-called “pre-sold” works that found buyers before the VIP opening, a way for first rank dealers with hotly desired works to pick and choose remotely.

There appeared to be a genuine hunger for quality, as evidenced by the modestly scaled Gerhard Richter “Abstraktes Bild” from 1997, at New York’s Dominique Levy Gallery, which sold for “north of $6 million,” according to Lock Kresler, who will run Levy’s new operation in London’s Mayfair next year. The Richter appeared in the 1987 Venice Biennale and at the artist’s solo show at the Anthony d’Offay Gallery in London in 1998. “Three or four people were seriously looking at it,” said Kresler, before one of them pulled the trigger.

The gallery also sold a 12 by 12 inch Frank Stella geometric abstraction, “Delaware Crossing” from 1961, for $1 million, as well as a major suite of eight large-scale paintings by German artist Gunther Uecker, “Weisse Bilder (White Pictures)” from 1989-92, that went to a European foundation for $5 million. Six of the eight Ueckers were staged in a cloistered room outfitted with a single bench for contemplation, that is, if anyone cared to take the time to sit and meditate. The paintings were in part an homage to the Japanese-based Gutai group and executed by the artist with his hands and feet, literally using his body as painting tools.

Art commerce was raging at New York/London Skarstedt Gallery, including a fierce and fantastic and upside down figured Georg Baselitz painting, “Edvard in Front of the Mirror (Munch)” from 1981, that sold to a European collector for $3 million. “I had three people on it,” said gallerist Per Skarstedt, “and I was surprised because Baselitz’s market is very soft, but this is a fabulous painting.”

The dealer also sold a Richard Prince joke painting, “You No Tell—I No Tell” from 1987, in acrylic and silkscreen ink on canvas and measuring 56 by 48 inches, for around $2.5 million, and a freshly minted Picasso-esque George Condo painting, “Smiling Girl” from 2014, for $500,000 to a German collector. But Skarstedt’s real coup was the sale of Andy Warhol’s late and large fright-wig “Self-Portrait” from 1986 to an American collector. The asking price for the 80 by 80 inch acrylic and silkscreen ink on canvas was “in the mid-30s,” according to the dealer, that is, in excess of $30 million dollars. “I can go home tonight,” joked the dealer.

“Our very brisk early sales started off with people who know us,” said partner Lucy Mitchell-Innes.

At almost every turn or crossing of the Art Basel aisles, collectors, advisors, tire kickers, and others congregated around works or studied the fold-out maps to find their favorite galleries.

For whatever reason, a momentary lull at New York’s Paula Cooper gallery disguised the multiple sales that took place during the first few hours of the opening, led in part by dual suites of Sherri Levine’s “Nature Morte: Purple and Red Roses,” on handmade rice paper, that sold for $150,000 each. Both sets of six floral compositions went to European collectors, according to gallery director Steven Henry.

The gallery also sold abstract works by Kelley Walker, including “Untitled,” a 15 panel, pantone four-color process with acrylic ink on MDF from 2012, at $225,000, as well as a fascinating and slightly eerie Bruce Connor, “Religious Instruction” from 1990, comprised of three engraving collages, for $40,000. A brand new Tauba Auerbach, “Panes Trans/Step Ray,” an off-white geometric abstraction that can cause vertigo at close inspection, sold for around $200,000

On a larger scale, both in price and square inches, Rudolf Stingel’s grand and pink hued against a volcanic black ground abstraction, “Untitled” from 1996-97 and measuring 78 by 78 inches, sold at an asking price over $1 million.

Other standout pieces that sold almost instantly included Jim Hodges’s electric blue “Untitled (Shadow Blue/Black”) from 2014, in glass on canvas, at New York’s Barbara Gladstone Gallery, in the $700,000 range. “We sold it in the first 10 minutes of the fair,” said Robert Goff, adding that it had not been offered before the fair because “Barbara [Gladstone] doesn’t like to pre-sell.”

The gallery also sold Marisa Merz’s “Senza Titolo,” an undated landscape-like painting from circa 1980s, in the region of 300-400,000 euros. But it was possibly the Sigmar Polke at Gladstone that attracted the most attention as the other-worldly “Laterna Magica” from 1990, executed in lacquer on transparent synthetic fabric in artist frame and rather modestly scaled at 53 ¼ by 59 1/8 inches, sold somewhere between $1.3-1.6 million.

London/Sao Paulo/Hong Kong’s White Cube contributed to the rich mix of first day sales, including Julie Mehretu’s large-scale gestural painting “Mumbo Jumbo” from 2008, at $4.85 million; Damien Hirst’s “Nothing is a Problem for Me,” a medicine cabinet vitrine in glass, painted MDF, steel, aluminum, and pharmaceutical packaging and stepladder from 1992, for $6 million; and Zhang Huan’s “Grand Canal,” for $1.8 million.

If there was a first-look prize for most art transactions executed in a single day, New York/London David Zwirner appears to be a front-runner. Jeff Koons’s sparkling “Dolphin,” in mirror-polished stainless steel with transparent color from 2007-13, was a big catch at 20 1/8 by 78 3/8 by 371/2 inches, selling to an Asian client for $5 million, according to David Zwirner. It is from an edition of three plus one artist proof.

Other sales at Zwirner ranged from Gerhard Richter’s “Farbtafel (Color Chart)” enamel paint on canvas from 1966, in the region of the $2 million asking price to a powerful Bruce Nauman wax sculpture, “Andrew Head/Andrew Head Stacked” from 1990, for $3.2 million.

Though no price was released by the gallery, in deference to the work’s new owner, a stunning Ad Reinhardt canvas, “Blue Painting” from 1951-53, measuring 80 by 59 7/8 inches, sold to a European collection. An art advisor and former auction house expert with apparent knowledge of the transaction suggested the price was “north of $10 million” — if accurate, it crushes the auction record for the artist, which stands at $2.7 million.

Referring to the painting, David Zwirner said, “We’re so excited because he’s the father figure for a lot of this Minimalist thinking that comes later. It’s great to have that type of quality at the fair.” Zwirner’s stand was formerly the territory of the late and legendary art dealer Ernst Beyeler, whose eponymous Beyeler Foundation is directly across from Zwirner’s patch. “This is the old Beyeler booth,” said Zwirner, “so it really forced us to curate our own stand.”